The fact that January and February were warmer than usual while March was characterized by winter temperatures caused quite a few difficulties for asparagus cultivation in the Foggia province (Puglia).

"The late frost meant operations started late. The real problem was indeed the one-week delay rather than the loss of initial produce. Sales picked up at Easter with low quantities and prices on the up, then the warm temperatures pushed production and quotations dropped," explains Giovanni Pasquariello from a company located in Carapelle (FG).

"The new drop in temperatures towards April 20th-25th halted production again, leading to an increase in prices. Things also improved thanks to the bad weather in Spain, as we managed to meet demand in Poland, Switzerland and Germany. Sales have now gone back to normal, with fewer demands from Eastern Europe. We are focusing on the domestic market, France and Scandinavia with quotations of around €2.00-2.60/kg." 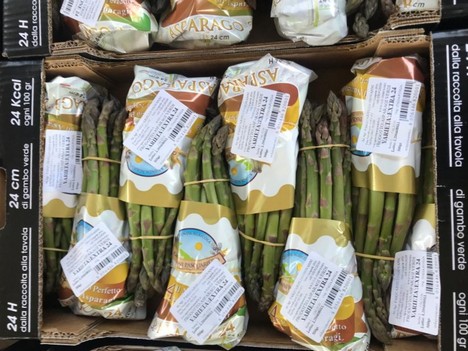 90% of the asparagus has reached Italian and foreign big retail stores in 500 gram bunches. "Without the H&R sector or fresh produce markets, we have not introduced other types of packaging or the loose produce. Conditions permitting, the campaign should continue until mid-June."

Asparagus crops are currently being converted to organic crops.