A remote imagery research project on citrus orchards is set to be expanded, after promising results at a Western Australian farm.

Professor Andrew Robson, from the University of New England, has been involved in a project with WA's Department of Primary Industries and Regional Development (DPIRD) to determine whether remote imagery can provide accurate fruit yield estimates and variation. The research has received funding to expand to two other citrus growing areas in Mildura, Victoria and the New South Wales Riverina region.

"We evaluated satellites and planes above Moora Citrus to work out whether we can measure tree health, and also correlate that with yield and quality," he said. "We found that remote sensing is an effective tool in looking at tree health and looking at production. It does need the appropriate calibration and validation, and that is what we are doing over the next few years, with the support of industry and growers. Luckily, with the support of Citrus Australia, Macadamias Australia, Olive Growers Australia, Hort Innovation and a number of big growers, we are able to expand to a three-year federally-funded project. The two main things are to continue the evaluation of the best sensor for yield forecasting but to also map all the commercial citrus across Australia."

At Moora Citrus, the research team identified seven different blocks, some navel and some mandarin, looking at tree health and variations, and Professor Robson says locations were chosen that represented high, medium and low-level growth. The airborne system was run by a Perth company ArborCarbon and has high-resolution systems ranging from two to 30-centimetre pixels and seven different bandwidths.

"We captured it in February, which is the final fruit set, and pre-harvest in July," he said. "We also used the satellite provided by America, which has 1.2-metre pixels, or you can sharpen it down to 30-centimetres, and eight spectral bands. As a grower looking at all your farm, it is useful to see what blocks are performing well and which ones are not. We also classify each block separately, so within every block, we get that variability of high, medium and low growth. This is useful as it removes the influence of variety and age - and you can pick up inherent issues with the farm and low/high productivity areas." 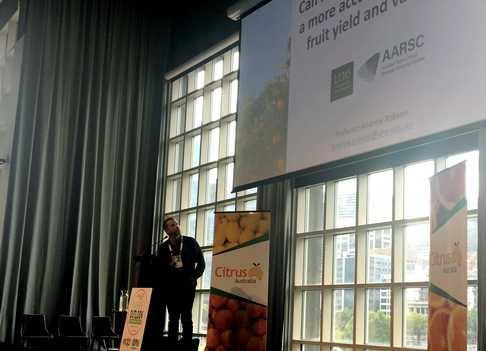 He added that if a grower only wanted variability across the farm or a block, there are cheaper technologies available that provide that information. However, if a grower wants a tree-level report, a high-resolution system like satellites, drones or airborne systems are needed.

To analyse the accuracy of the airborne data collection, Professor Robson said the research team manually counted the fruit at the selected locations and was then able to build a relationship from the canopy reflectance against the actual counted fruit.

"We then do a forecast, so we apply that to every single tree, and we get a prediction of the average kilograms per tree," he said. "That gives a fruit count, but we do the same for fruit weight before harvest. This is all done from 18 trees. It works really well; accuracies are quite high, although mandarins were a bit lower. So, we can get a derived map of yield and fruit number that's useful - so not only fruit number predicted by block, but also the maps. As we are using multiple bandwidths and systems such as the plane or the drone can also get things crown area, so you can start putting a number of those parameters together into a multi regression and extend the prediction from those blocks to all those blocks in the farm."

But Professor Robson warns that there are some inherent issues with trying to put remote sensing into tree crop estimation; it is influenced by variety, location and season.

"It is quite dangerous to apply an algorithm developed one year over one crop to more crops," he said. "You are much better to identify the variation and do the ground truth to calibrate it. We are only talking 18 trees to count, whereas existing counts may be up towards 70 trees to get an estimation. So, if we can bring it back to 18 from 70 - there is obviously time and labour savings and the accuracies are quite good."

Professor Robson added that the work is also helping with biosecurity responses and post-disaster management, with information from similar research in mangoes, avocados and macadamias also being used to assist in response to natural disasters such as Cyclone Debbie in 2017 and the 2019/20 bushfires in New South Wales and Victoria.