"Supply of Spanish Doré slow to get going"

The Spanish potato import season has started again at VerDi Import. Although the Barendrecht company has mainly focused on fruit imports in the last decade, the roots of the Verweij family in the potato trade are still evident in this specialised branch. VerDi grows the Spanish Doré in the delta of the Rio Guadalquivir in the far south of Spain. 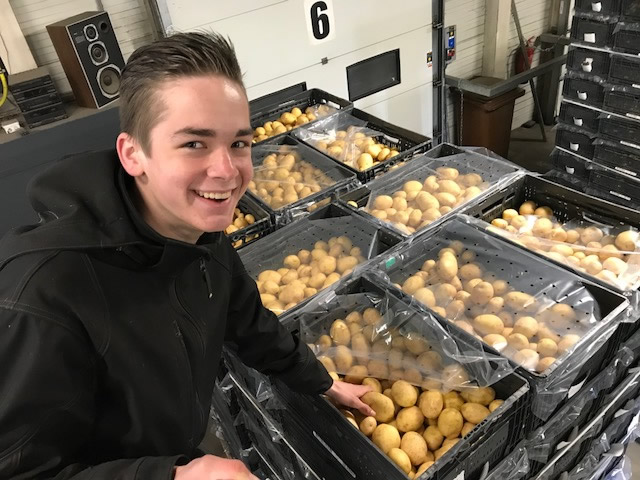 The early potato period is also an educational period for the younger generation. Trainee Jonathan Flach poses with the first Spanish Doré.

Daniel Verweij, who has strengthened the VerDi Import team for more than a year and a half, after having worked as an independent entrepreneur in the school fruit for several years, is the fourth generation of potato trader active in this branch of sport. "The supply is currently limited, as there has been a lot of rain and many loads were delayed, but there is plenty of demand. The potatoes have been sold before they arrive."

The Dorés are harvested by hand in Spain and are of good quality. "The weather there is the opposite of here. The growing season has started with a long hot period. Now that a lot of rain has fallen, it does benefit the full taste," says Daniel. He expects limited arrivals in the coming days. "Only when it has been dry for a week in the clay region of the delta of the Guadalquivir can there be full clearing. The weather forecast is good, so the shortage will probably be over after next weekend."

Mark Verweij shows Gert Jan van den Heuvel a potato with a clay cap. This is a specific 'potato message' in wet harvesting conditions on the clay. Due to the bad weather recently, the harvesting is very difficult in the Spanish clay and after washing sometimes a piece of clay remains on the potato

In addition to the Spanish Dorés, VerDi Import completes the import package with Galatine bantam, Alpha's from Malta and Nicola's from Morocco. "Galatine bantam is less popular than before, but for the potato people they really belong. The Alpha's from Malta are especially popular with the domestic wholesalers and the Moroccan Nicola's mainly find their way in Eastern Europe. For the Spanish potatoes, there has been a real run on the late Moroccan Nicolas. "