A leading global packaging company says while reducing plastics, including from fresh produce items is a key focus for the international community in becoming more sustainable, consumers must also become educated on how to correctly dispose of it.

Giro's Group Business Strategy and Sales Director told Australian producers that companies need to make sure that they are including recycling as part of their business models.

"I think a key question is; is plastic a culprit? According to my understanding, the answer is no," Mr Porta said. "We all need to educate consumers on an intelligent form of disposal of the plastic. If we throw plastic in the rivers or throw plastic waste in the cities, we could have a problem. If we make intelligent disposal of the plastic we won't have so much of a problem. So, we need to make a business model possible based around plastic recycling - ensuring an efficient waste collection, classification and recycling processes."

Giro is a Spanish company that started nearly 90 years ago, based in Barcelona, and is now present in 45 countries. It was originally a textile company, before creating packaging systems, including a line of 'net packaging' products around half a century ago - for items such as citrus fruits. It has shared a 20-year collaborative relationship with 'edp australia' as the local distributor. 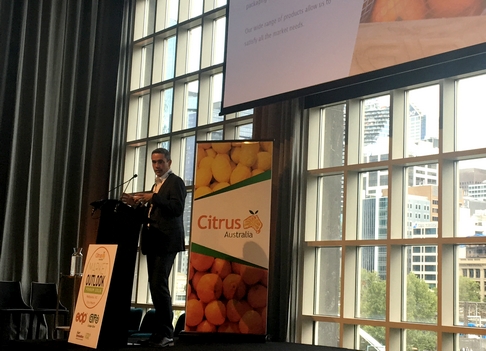 Mr Porta added that an existing problem is that there is a lack of selection for recycling in many countries.

"Many countries are not ready yet, and Australia is an example," he said. "I was told that here in Australia, they were collecting plastics but, on many occasions, they weren't getting recycled. This is happening in many countries. I say there's not a unified method in how to classify waste. Sometimes we are classifying properly at home, but there is a lack of consistency in recycling and things are mixed up again (down the line). If we start with raw material to produce plastic packaging for the consumers to use with the fruits; they then put the waste in the plastic bins, and it is taken to the industrial recycling plant and it is re-melted and converted into raw material again. That's the type of economy that we need to become more sustainable."

While he admits there are widespread demands for a more sustainable model, as well as environmental concerns and challenges coming from customers, there are also demands from supermarkets. But Mr Porta says the major companies have different opinions across the continents.

"Coming from central Europe: we have Carrefour in France, Lidl in Germany, Migros in Switzerland - they are all telling us to remove plastics from small packages up to 1.5kg," he said. "They don't want plastic at all and want 100 per cent compostable materials in the packing. Then there's another trend coming from the United States, United Kingdom and Australia - so the more Anglo-Saxon speaking countries - they put the focus on lightweight package solutions. For example, Tesco in the U.K didn't want compostable materials because consumers could get confused and put it in the plastic bin, therefore contaminating the rest of the recyclable waste. So, there are two different trends."

So as a market leader, Mr Porta says Giro has to give solutions to all of the customers, therefore the company has come up with a product to cater to both supermarkets.

"Our recommendation, however, is more in line with the Anglo-Saxon trend, which is lightweight packaging and recycling," he said. "Plastic, in fact, is more sustainable in terms of the carbon footprint, if we recycle properly, compared to paper. When producing paper, it takes up more water, much more energy than producing plastic, if we just recycle properly." 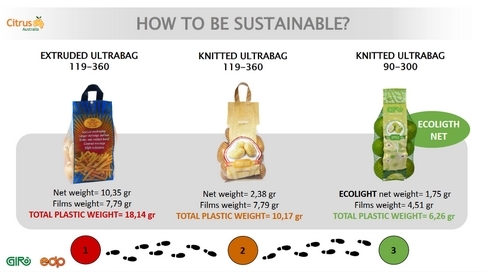 Giro has developed not only a number of lightweight net packaging products but also the systems and technologies to suit major productions. The bags range from compostable material through to ultra-lightweight bags, as light as just 3 grams.

"We believe that the net bag is a sustainable packaging solution, but we need to avoid over packaging, reduce the number of packaging and producing lightweight packages," he said. "We need to then push administrations to create efficient waste collection and recycling infrastructures. Finally, we need to educate consumers on responsible use and how to dispose of waste."

Mr Porta says there is massive potential for growth in Asia and Oceania, which has so far, not been strong in the uptake of the 'European' packaging systems.

"It is difficult to compete with local manufacturers in Asia because of the cheaper prices," Mr Porta said. "We are studying for future growth in Asia and that will be our next opportunity. We have been presenting recently, our lightweight bag that weighs just three kilograms, and this can be sold for existing machines and, in Australia, there are a lot of those machines."