Fresh produce growth for the week of April 19 versus the comparable week in 2019 did increase, but much less so then seen in prior weeks, at +3.3%.

“We knew it was going to be hard to beat prior year Easter numbers,” said Joe Watson, VP of Membership and Engagement for the Produce Marketing Association (PMA). “While no longer showing double digits, it is encouraging that the elevated everyday demand generated continued gains. Now, going into the summer, it is important to keep the momentum for vegetables going and build strong demand for fruit, despite the vastly different trip and spending patterns. A number of high-impulse summer fruits are around the corner and we have to challenge ourselves to build impulse sales in new ways and within a new reality, including online ordering, trip pressure and a desire among shoppers to minimize time spent in-store.”

Fresh Produce
Fresh vegetable sales growth (+7.7%) was more than 8 points higher than that of fruit, but it was also the first time that gains fell to single digits. Compared with the same week in 2019, fresh produce generated an additional $51 million in sales. Meanwhile, fruit sales were off slightly when compared to the same week in 2019, at -0.4%. 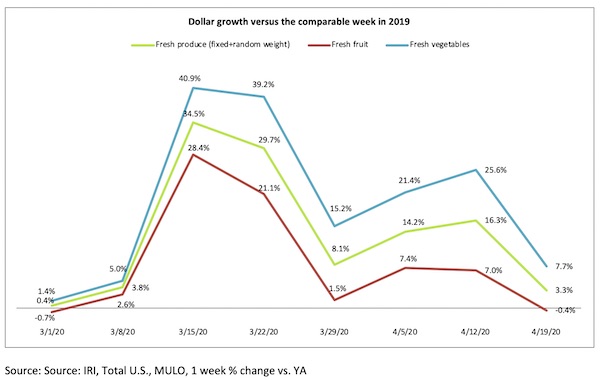 Dollars versus Volume
As seen in prior weeks, there continues to be a gap between dollar growth and volume growth, though it is much diminished from prior weeks. At the onset of coronavirus in the U.S., dollar and volume sales were relatively close together for total produce, at +0.4% for dollars and +1.3% in volume. For the week of April 12, the volume versus dollar growth gap was largest to date, at 5.8 percentage points, but it is back down to 0.9 points for the latest available week. 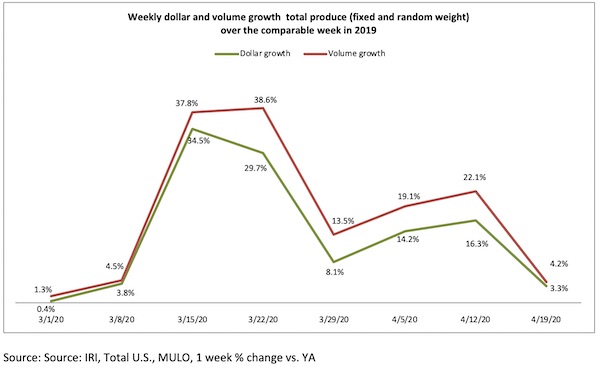 Whereas the gap had been driven by vegetables for each of the prior weeks, it was fruit that drove more volume than dollar sales during the week of April 19. For vegetables, dollar sales were two points ahead of volume sales.

Dethroning potatoes, which had been the absolute growth leader since the onset of coronavirus, oranges added the most dollars over the same week in 2019, at $12.6 million. This translated into a percentage gain of 58.8%. Others that gained big in dollars were lettuce (+$11.5 million), tomatoes (+$10.9 million) and potatoes (+$10 million). However, at the category level, big differences between dollars and volume were observed for some fruits and vegetables as well. 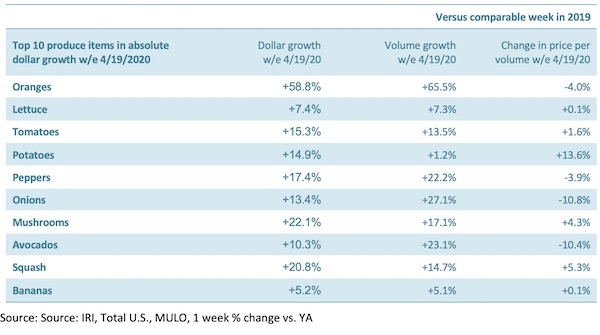 Fresh Fruit
Going up against Easter 2019 resulted in flat sales for fresh fruit. The top 10 items in terms of dollar sales saw sales declines for six items, including powerhouse berries and increased sales for the remaining four items. Oranges, lemons and avocados were the only ones to remain in double-digit territory. “Next week will be an important one to see how much the elevated everyday demand is able to push sales past the 2019 level,” said Parker. “There is so much snacking competition across the store these days. It will be imperative to create demand for fruit through recipes, displays and above all, highlighting the nutritional benefits of fruit. Educating consumers on items for now and items for later to cover them for the entire week will also be an important strategy in the current retail climate.” 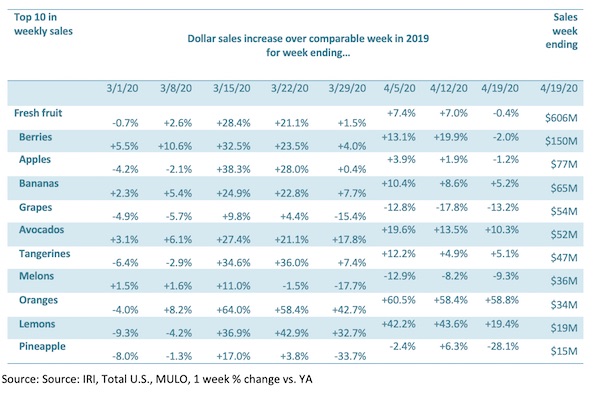 Fresh vegetables
Lettuce took over as the top sales category and the top contributor to dollar growth in vegetables, adding $11.5 million in sales versus the comparable week in 2019. Also jumping ahead of the uncontested sales driver to date, potatoes, were tomatoes that added $11 million this week. Other impressive growth categories were potatoes, peppers, onions and mushrooms. Asparagus dropped back out of the top 10 and squash was back in 10th in terms of weekly sales. 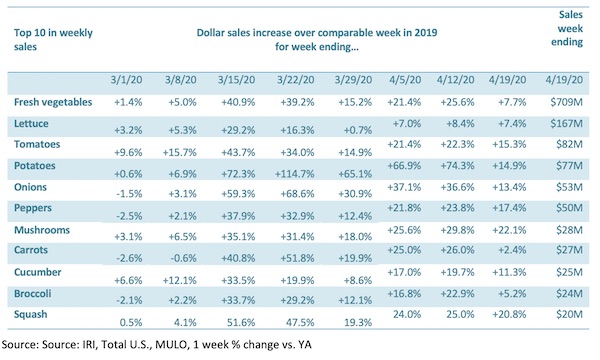 Packaged Salads
Packaged salad sales trends are very similar to that of total produce, with two very strong weeks in the middle of March and growth back in line with the 2019 trends toward the end of March. For the week ending April 19, gains stayed on pace, right around the +6% mark.

Fresh Versus Frozen and Shelf-Stable
Consumers continued to split their produce dollar three ways during the week of April 19. Frozen and canned vegetables had ongoing strong growth during the third week of April. But whereas gains in frozen vegetables had been outpacing gains in frozen fruit since the week of March 15, frozen fruit had a particularly strong week, at +35.7%. 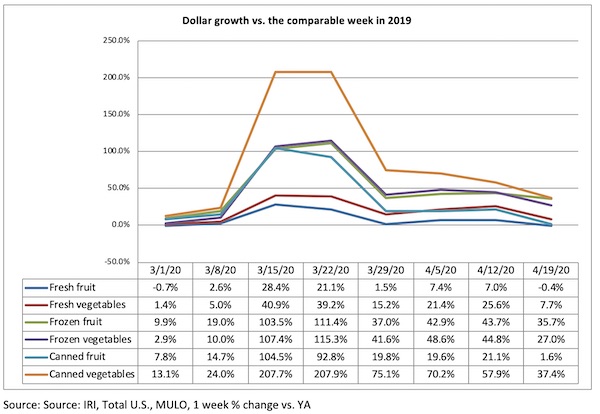