The marketing campaign for early potatoes from Salento, in Puglia, started on February 15-20 with tubers grown in greenhouse. Later, the open field product will follow, around 10-15 March. Prices are slightly lower than normal because of the stop of the HoReCa sector and the closure of local/weekly markets, due to the Covid-19 emergency. But in the Italian and foreign large-scale retail trade, new initiatives are being taken. 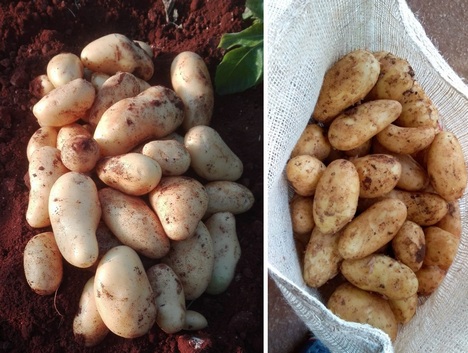 "In order to increase sales and offer a fresher product in supermarket chains, we are trying out a special 3 kg package in Germany: a box that reflects the current needs of the Covid-19 emergency", explains Francesco Romano, manager of Ro.Gr.An in Parabita (Lecce). Commercial tests are also underway in the Italian large-scale retail trade.

In supermarkets early potatoes are usually sold in bulk, inside crates. "With this packaging, we are able to guarantee all the necessary hygienic standards. The consumer is able to take the box home without the product being touched by anyone else". 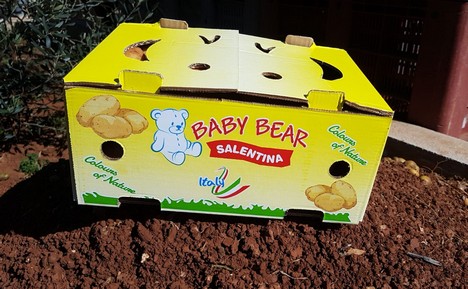 The 3 kg box of early potatoes from Salento, under the Baby Bear company brand. Tests are being carried out in a German distribution chain, and in the Italian large-scale distribution as well.

At the moment on the European markets there are early potatoes from other countries as well, which can create some difficulties. "But it is the quality of our tubers that, in this case, makes the difference," says Romano.

In addition to Germany, some batches of new potatoes are being marketed in the Netherlands, France, Belgium and, to a lesser extent, in Eastern European countries.

"In particular, we are having problems with trucks going to the Netherlands, because of the rising costs - says the manager of Ro.Gr.An - Before the emergency, most of the trucks used to load our potatoes and take them to their destination, and then return full of flowers and plant bulbs, for example. Now that it is not possible to have a return load, this is often a one-way trip, therefore the transport costs are inevitably rising." An increase in logistics prices has also been reported in Germany.

The campaign of early potatoes from Salento will go on until June 30th. We will then continue with the standard consumer tubers.