Shopping patterns have changed tremendously in recent weeks. First, there was the panic buying in mid-March where consumers bought about everything they could get their hands on. The sale of shelf-stable produce went through the roof and staple items like potatoes were hard to come by. The panic buying tapered off and was followed by consumers becoming mindful about going to the store. In order to reduce the number of shopping trips, they are now buying more groceries at once and spending more. A cashier at Trader Joe’s mentioned that the average amount consumers spend in one trip increased from $30 to $60.

“Today, going to the store is a lot more work than it used to be. People are buying as much as they can during a shopping trip, and are now looking for ways to store their fresh items,” says Greg Ganzerla, CEO of PEAKfresh USA. The company manufactures Modified Atmosphere Packaging (MAP) to extend the shelf life of produce. “We provide commercial options for growers and shippers as well as home use shelf life packaging for consumers,” he added. Within the home-use segment, Ganzerla has seen business picking up greatly over the past few weeks. “In the beginning of all of this, we received many calls from people who shared that their produce didn’t last as long.”

Part of the reason is that the first few weeks of the pandemic, many retailers were selling everything they could get their hands on. “Even lower quality produce that we’re not used to seeing in the market. On top of that, people started washing produce before putting it in the refrigerator. Unfortunately, washing produce before storing it, will only make it rot faster.” Another mistake that is often made is to put the closed plastic produce bag from the store in the refrigerator without precooling. Because of the temperature difference between the car and the refrigerator, the produce in the store bag will condensate, locking in ethylene. As a result, produce will deteriorate much faster.

Improve recycling
“Our modified atmosphere bags for commercial and home use have been designed to extract ethylene and extend shelf-life,” said Ganzerla. If the product is cooled down after purchase and then put in a PEAKfresh bag, it will last approximately two to three weeks instead of a few days.” Not only are the bags re-usable and recyclable, they are also certified for organic use. Recycling is a subject that is near and dear to Ganzerla.

“I am very concerned about the environment, but the goals most states have set to reduce the use of disposable plastic bags in retail, and in some cases no longer use them, are alarming to me. There is an incredible amount of germs and bacteria inside reusable shopping bags people bring from home.” For that reason, many stores are now prohibiting the use of personal bags during the pandemic and some retailers have returned to providing free bags to reduce the possibility of cross contamination. “We can’t do without plastic and in my opinion, the United States needs to get better at recycling. If you look at the list of top recyclers in the world, you will see that the US hasn’t even reached the top ten. We can do better.” 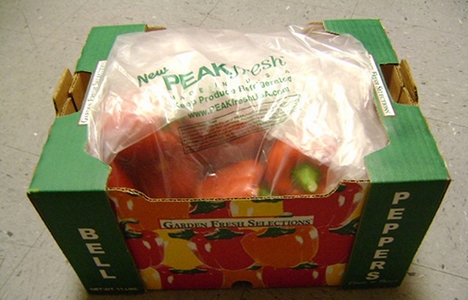 Commercial packaging
Although the sale of home-use bags has taken flight, the majority of the PEAKfresh USA’s packaging is sold commercially. Within the commercial segment, modified atmosphere packaging is used to ship produce from point A to point B across the US, and also across the ocean. “It takes 4 to 5 days to ship strawberries from California to New York. If unprotected, most berries wouldn’t make it to the store level in the good condition that people are used to,” mentioned Ganzerla.

“With the help of our pallet covers, decay is combated by removing ethylene gas while keeping high humidity levels, so the berries don’t over ripen or spoil in transit.” It’s like an insurance policy to protect the product until it gets to the store level. In addition, PEAKfresh is used to extend shelf-life during long periods of storage. “In the stone fruit industry for instance, June through late summer is the main time to harvest. Yet, we see fresh fruit in the markets all year around. By using our pallet covers and box liners, a controlled modified atmosphere environment is created, allowing product to be successfully stored long after harvest and shipped to stores as needed,” he said. 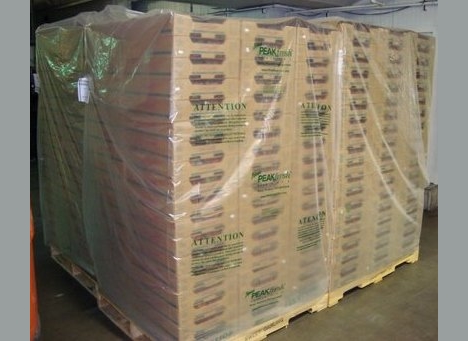 Ganzerla started selling PEAKfresh packaging in 1999 as a distributor. “I bought the licensing in 2007 and cover the United States, Canada, Mexico and all of South America,” he said. Recently, the company was granted Best Plastic Fabrication Company by the city of Lake Forest, CA where the company is located.