VTA: Dutch free supply of potatoes is 2 x higher than the 5-year average

The Dutch Farmers Association, VTA, inventories its members' potato stocks three times a year. The third stock take is usually planned for 15 April. But the potato market collapsed this year.

Members, therefore, asked for an estimate as of 1 April. That is why the stock inventory has been done two weeks earlier this season. (In previous years, the inventory was done for 15 April. This season, it is for 1 April.)

Less delivered than previous years
Op 1 April, 44% of the harvest was delivered. That is less than the previous season. On average, on 15 April, about 57% is usually delivered. In sandy areas, about 85-90% has been delivered. In the clay areas, it is only 30-35%. That is based on a rough sand/clay division.

Of the harvest, 74% was sold. That is usually 85% during this period. The participating growers delivered 22.6% less in absolute tons than the long-term average. The absolute stock still in storage is 37% higher than the five-year average.

Of the stock in storage, 53% was sold. The average percentage for this period is 65-70%. The free stock is 2 x higher than the five-year average. 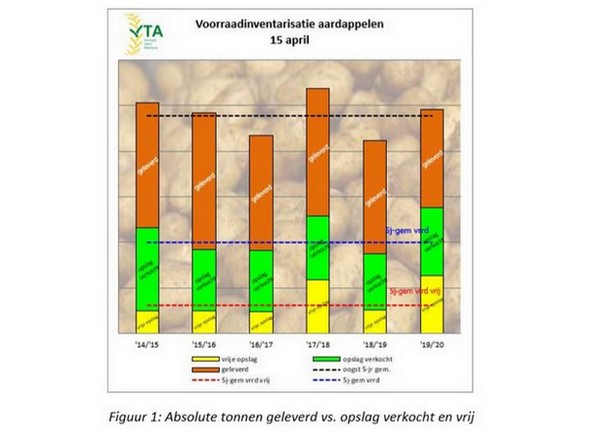