Plantings in France should end this week 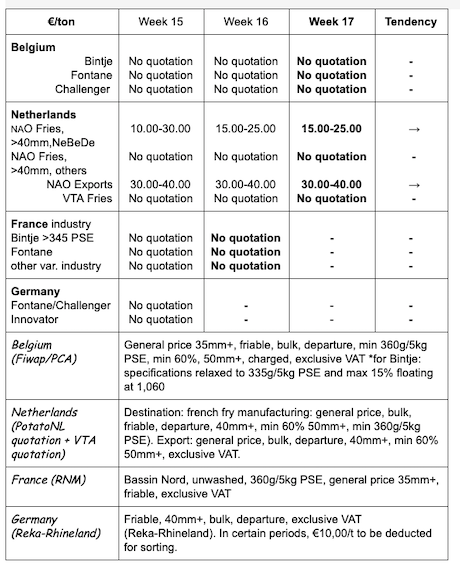 Industrial potatoes: the work pace of the different Belgian units varies greatly (from 20% to almost 100%) depending on the type of product (fresh fries, frozen fries, specialties, flakes, chips…) and on the markets (European supermarkets, fast-food, European or global export…). This pace also varies from one week to another depending on the sales (prospects), staff availability...or the (slow) reopening of the snack bars (fresh fries). Priority is given to removing the contracts, almost exclusively. There are almost no purchase on the free market, and even the excess volumes are removed less and less (and left unpaid, increasingly often). The only observed transactions regard livestock feed and biogas, at prices between 0.50 and 1.50 €/q, even 2.50 €/q for flakes.

The export of fresh potatoes towards the East and the South is becoming difficult due to the stronger competition from Dutch and French exporters, who are geographically closer. Preparers-packers for the domestic market maintain their activity, at 10% to 20% higher than “normal”, and must temporarily buy in addition to their contracts (at prices higher than 12.00 €/q, crate/fridge storage, washable quality, with useful certification…) but the early Mediterranean potatoes are appearing on the shelves.

Prices for all comers, 35mm+, min 60% 50mm+, min 360g/5kg PSE, bulk, friable, departure, excl.VAT, direct delivery: Bintje, Fontane, Challenger: no quotation due to the lack of transactions for the industry.

Netherlands
The Dutch government has released a budget of 50 million euros to compensate for the potatoes which could not be worked (1 million tons at 50/ton). According to the BO-Akkerbouw interprofession, about 1,500 producers are affected. The industrial activity is reduced and covered exclusively by the contracts. The domestic fresh market is still going very well, with producer prices between 10 and 18 €/q, depending on the variety and the quality. Export concerns Eastern countries, with producer prices under pressure between 7.00 and 10.00 €/q. 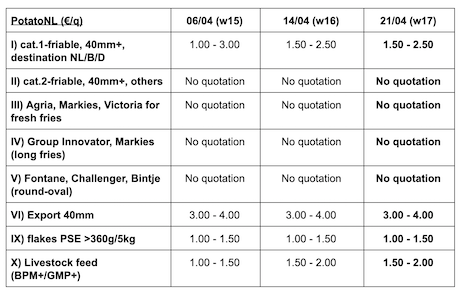 France
Plantings had advanced by 60% on April 15th (estimation UNPT) and should end this week. There is no demand from the factories on the free market, and the industrial activity concerns mainly chips and flakes. The processing campaign will continue until July or August, for fries (watch for quality) and flakes. However, it is likely that 500,000 tons will not be processed. A search for solutions and alternatives is underway with all the operators concerned (starch, animal feed, methanization, storage of finished products…). Export remains active towards Italy, Spain and Eastern countries, with lower prices for the basic qualities. The domestic fresh markets are more dynamic in the south than in the north of the country, with prices even up for the top-quality.

Germany
After the good sales around Easter, trade is calm again but remains good. Purchases at the farm are on the rise. Shipments/exports towards Eastern Europe are growing. The planting of early potatoes is over, now followed by the mid-season varieties and those for conservation.

Organic potatoes: producer prices returned trade: between 63 and 65 €/qt. Supermarkets have launched promotional actions for organic potatoes in order to get rid of the remaining volumes before the arrival of organic potatoes from Egypt, followed by Israel. We note significant damage goods leaving for animal feed. 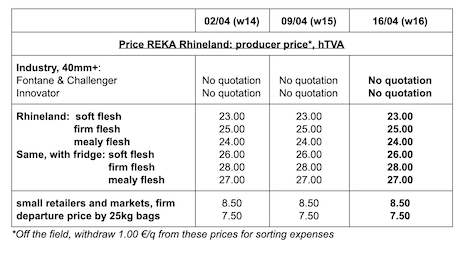