An exceptional clementine season has started at Sitrusrand, in terms of both volumes and quality, inside and out. “It’s a miracle, actually,” laughs Attie Janse van Rensburg, at how well everything has come together for them on clementines this year.

He placed a picture of their new clementines on social media and was taken by surprise at the enthusiastic response he received from across the world. “I think everyone was looking for a bit of orange among all of the yellow – South Africa’s lemon production is about three times what it was this time last year, and here in the Sundays River Valley we can pick lemons throughout the year, so the orange of the clementines makes a welcome change amid all of the yellow.”

Clementines on the packline at Sitrusrand, a welcome orange colour amid all the yellow (photos supplied by Sitrusrand)

Clementines are in strong demand in Europe, he says. All of their production is marketed by Safpro. “The colour is looking really good and the brix is around 11 or 12, unbelievable quality. There are lots of fruit on the trees, it’s an on-year.”

Novas will start next week and if the predicted rain allows, the early navel harvest could start this week already. They’re expecting an on-year on their Orris (he’s a fan of the variety) while Mor is still on trial for them, but looking promising. Their Nadorcott harvest is preceded by Valley Gold mandarins.

Not that they are not wary of the inevitable impact Covid-19 is going to have on the rest of the citrus campaign. As seasoned citrus producers – Sitrusrand is a large-scale citrus operation with three citrus packhouses – they know better than to count their chickens before the ship has left harbour. For the moment they’re not yet at their citrus peak and relieved that there have been no significant disruptions to logistics thus far. 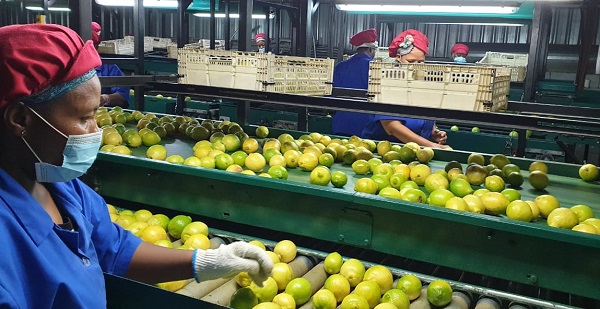 “Every day is a challenge. Regarding physical distancing many areas in the packhouse are fine, but in the sorting and packaging areas we’ve re-arranged personnel to maintain the right distances. We’re functioning well in the packhouse, slightly below capacity staffing levels, but it’s on the farm side that we’re struggling a bit to get people.”

Lockdown restrictions have hampered the movement of seasonal workers across provincial borders. Many of the pickers, who are Eastern Cape residents, go to the Western Cape to pick table grapes or topfruit during the season and return to their home province during citrus season. 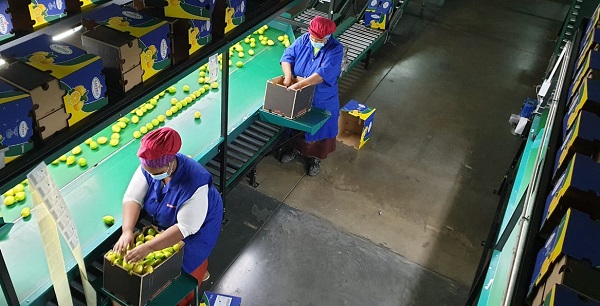 Packers maintain a physical distance at the packline

After initial difficulties (for instance supplying workers who haven’t yet reported on the farm with permits) many are finally arriving in the Eastern Cape, especially when regulations were eased during the second part of lockdown, but harvesting teams aren’t yet 100% complete.

The influx of workers from a province with much higher Covid-19 incidence – the Western Cape has over 900 cases of Covid-19 while the Eastern Cape has 310 – has created some unease, Attie notes. “For that reason we went the full monty to protect our workers. Our bus drivers each has a thermometer, we’re trying to ensure no-one who’s ill comes to work. Everyone’s wearing a full mask which we had to import from China; we couldn’t get sufficient supplies locally.”

Availability of spare parts for computerised sorters has turned out to be a headache. “Even something as simple as a computer hard drive can now be a problem to obtain, and without a hard drive, a sizer can’t run. All of the spare parts have to be imported and we’re told there are boxes full of parts waiting at airports, but it’s set aside in favour of higher priority goods. So we’ve been having to make do and make plans. ”

Sitrusrand was busy with construction of a fourth packhouse in Addo, due to come into use on 1 June, but the lockdown has interrupted the project a third of the way through. Juicing factories and 50% of production are in Addo, so it makes sense to have a packhouse in Addo besides the Kirkwood packhouses.

Community dialogue facilitates Covid-19 collaboration
The labour unrest of 2018 led to the creation of the Sundays River Valley Collaborative. They facilitate dialogue between citrus companies, employees and the broader community, together with a development specialist Prof. Deon Pretorius. The Collaborative not only succeeded in easing the tensions in the valley, but really got the community working together to a common goal, the progression of the Sundays River Valley, Attie says.

One of Sitrusrand's farms is called Simunye and it is 50% owned by a workers trust. 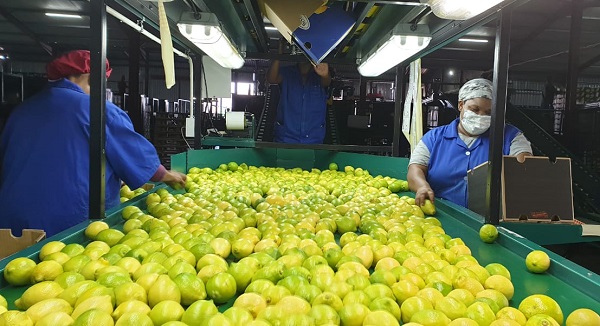 “It’s amazing how the community has come together in the face of the crisis. Something truly valuable came out of the protests of two years ago. The citrus industries together with the Collaborative has sanitised taxi ranks and buses, we’ve distributed thousands of bags of lemons and explained hygiene practices. The community is standing together where two years ago we were completely divided.

“At least as an industry we’re still allowed to work, so really, we can’t complain.”