Flight from Kochi to Abu Dhabi

Indian airline IndiGo has successfully operated the country’s first cargo-on-seats flight, sending fresh food from India to fill some supermarket shelves in the UAE. The flight flew from Kochi to Abu Dhabi over the weekend, transporting fruit, vegetables and other supplies to supermarkets in the UAE, particularly stores that "cater for the large Indian expat community" in the Emirates, according to IndiGo's CCO Willy Boulter.

A picture shared by Boulter shows the passenger cabin of IndiGo's aircraft filled with boxes of produce securely tied in, as well as overhead lockers filled with goods. 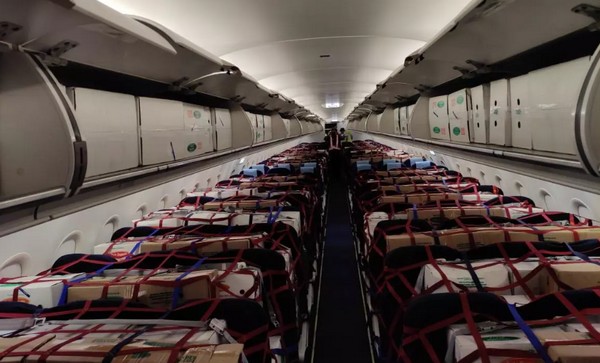 The flight to Abu Dhabi followed a domestic flight to transport goods, including medical supplies, from Delhi to Kochi on Thursday, April 16. IndiGo and SpiceJet are the only airlines in India to use passenger planes to transport goods, a move they were able to carry out following an announcement from the Directorate General of Civil Aviation (DGCA) in early April.

This directive allowed for fruit, vegetables and dry goods to be transported in passenger cabins, however, the guidelines do not permit the delivery of dangerous goods or marine products on seats.