Produce sales at retail remained highly elevated during the week ending April 12, while the demand from foodservice continued to be far below normal levels. 210 Analytics, IRI and PMA partnered to understand the effect for produce in dollars and volume throughout the pandemic.

“Easter is typically a big week for the produce department,” said Joe Watson, VP of Membership and Engagement for the Produce Marketing Association (PMA). “But with social distancing in place, Easter celebrations and dinners were very different in makeup and size, which likely affected sales. At the same time, the ability for retailers to encourage impulse purchases continues to be a challenge because consumers are spending less time shopping and focused more on list purchases. I expect shopping patterns to remain very different in number, size, day of the week, day part and online ordering trends for a while to come.”

Fresh produce
Since the onset of the coronavirus sales patterns, fresh vegetable growth has far exceeded that of fruit, and the week ending April 12 was no exception. Vegetable sales growth (+25.6%) was nearly 20 percentage points higher than that of fruit (+7.0%), while the two areas are roughly equal in size. Compared with the same week in 2019, fresh produce generated an additional $196 million in sales, of which $153 million was generated by vegetables. 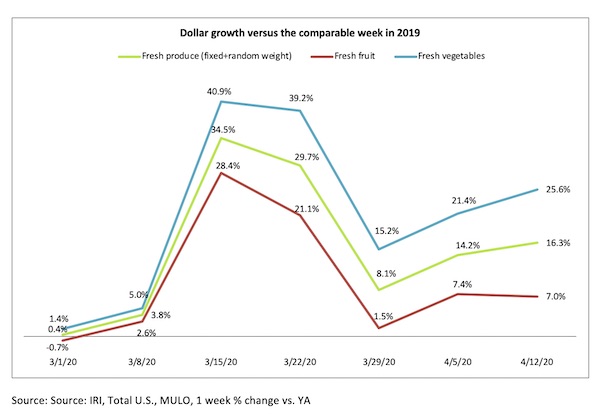 As seen in prior weeks, there continues to be an important gap between dollar growth and volume growth, pointing to a key role for price in the performance picture. The heavily reduced foodservice demand is providing ample produce supply. Starting with the week ending March 22, volume sales far exceeded dollar sales, which would indicate deflation setting in at retail for some areas. For the week of April 12, the volume versus dollar growth gap was largest to date, at 5.8 percentage points. 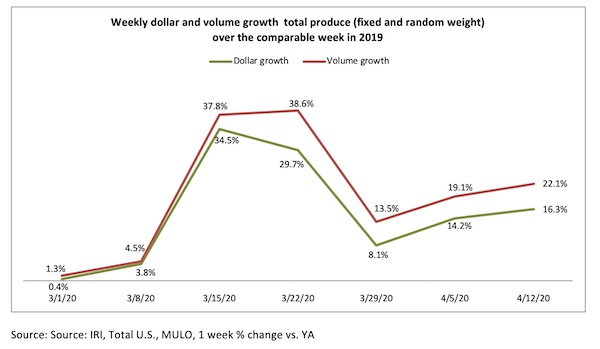 The gap is mostly driven by vegetables. For the week ending April 12, volume sales gains for vegetables were more than 12 points higher than dollar growth.

Potatoes have been the absolute growth leader since the onset of coronavirus in the U.S., adding $39 million in new dollars versus the comparable week in 2019, or +74.3%. Others that gained big in dollars were berries (+$26 million), onions and oranges (+$15 million, each) and lettuce (+$12 million).

“This week, asparagus, sweet potatoes and onions are three big ones that jump out at me,” said Watson. “While asparagus had a strong 29.8% boost in dollars, volume sales were up 73.7%. That means there is a lot of negative pressure on the average retail price, likely due to the lack of demand from foodservice. IRI found a 25.3% decline in the price per volume for asparagus the week of April 12 versus the comparable week in 2019. 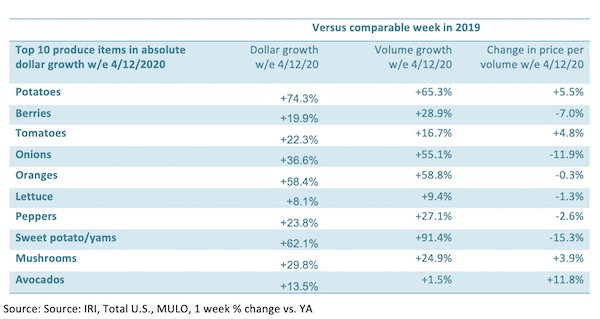 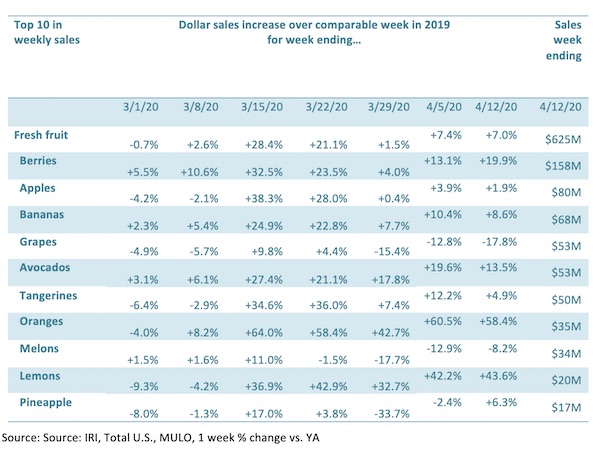 The third biggest driver of new dollars were avocados that jumped up two spots to fifth place in the top 10 sales list. Avocados was one of the few items that saw an increase in price per volume. “One of the reasons for more of the produce dollar going to frozen and shelf-stable is shelf life,” said Parker. “Many consumers struggle with how to plan out their week with fresh produce items for immediate consumption and items that last a little longer. So instead, they purchase some fresh and some frozen and/or canned items.”

Avocados Mexico is addressing this head on in the Florida market. A recent online grocery order pickup from the Walmart in Lakeland included consumer education on selecting avocados for now and for later, how to preserve avocados and how to serve them. The pamphlet showed how to ripen avocados using a paper bag and banana or apple and provided a paper bag as part of the education. 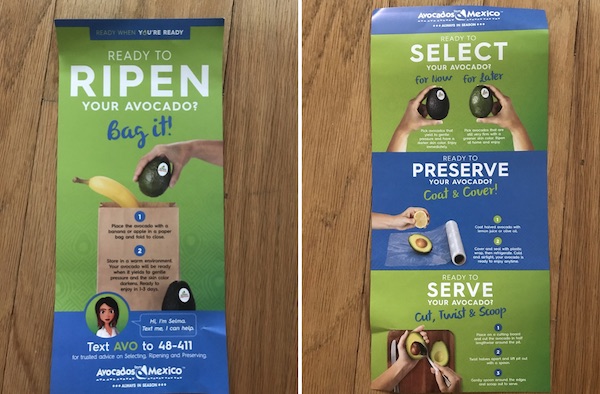 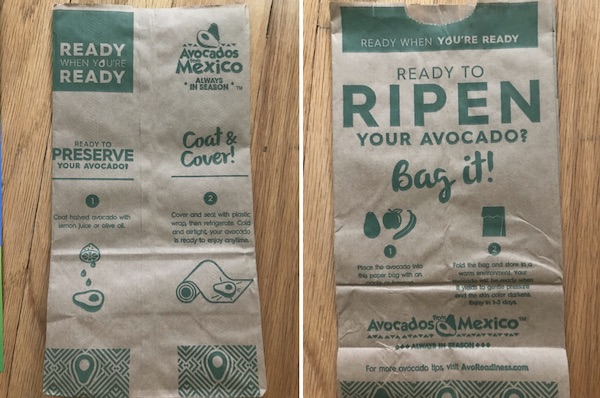 Fresh vegetables
Potatoes have been the lead growth driver for fresh vegetables since March 15 and the week of April 12 was no exception. Dollars were up 74.3%, which translates into an additional $39 million in potato sales compared with the comparable week in 2019. Other impressive growth categories were onions, mushrooms and asparagus. The latter made their appearance in the top 10 for the first time since the onset of coronavirus, bumping squash to the 11th spot in terms of weekly sales. 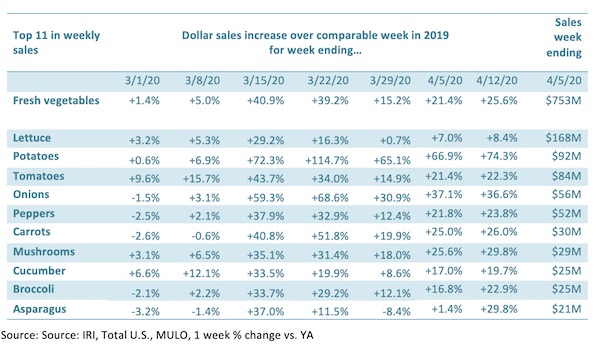 Packaged salads
Packaged salad sales trends are very similar to that of total produce, with two very strong weeks in the middle of March and growth back in line with the 2019 trends toward the end of March. For the week ending April 12, sales growth was up for the second consecutive week, at +6.3%.

Fresh versus Frozen and Shelf-Stable
Consumers continued to split their produce dollar three ways during the week of April 12. Frozen and canned vegetables had ongoing strong growth during the second week of April and have been leading sales growth since the onset of coronavirus during the early weeks of March. 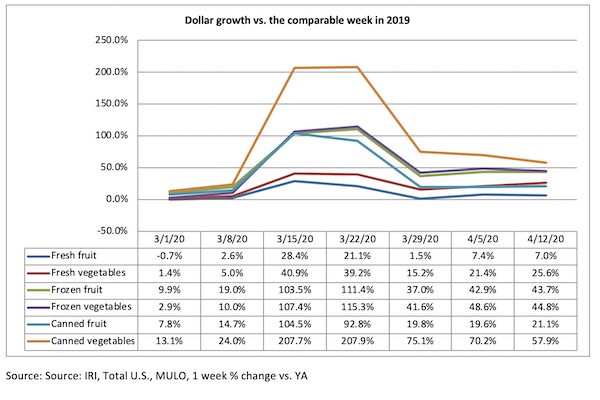