The apple season is coming to its late harvest in the Cape for The Fruit Farm Group South Africa. “It’s a very good crop of Pink Lady, particularly Rosy Glow which makes up a big part of our pome operations. Volumes are up and we’ve had a few cold snaps, so we’re comfortable we’re on track with colour. So far the quality has been exceptional across varieties and the season and we’ve had the highest class 1 packouts for some time,” says Trevor Dukes, CEO of The Fruit Farm Group South Africa, the amalgamation of Univeg in the Western Cape and the Katopé group in the north of the country in 2008. 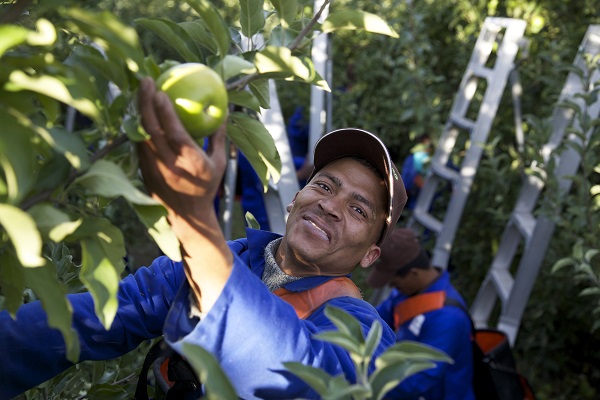 Their Pink Ladies are mostly destined for the UK - Trevor notes that the size of South African topfruit is a good fit for UK requirements; a slightly smaller fruit – with Cripps Pink for Africa and Russia. On apples and pears the company partners with Ideafruit on marketing, currently busy with Regular Atmosphere packing. Controlled Atmosphere programmes (mostly Goldens, Galas, Pink Lady, Packhams and Forelles) start in May.

They’re a big player in South Africa’s litchi industry (the past season had low volumes but the market was stable to good, Trevor says) and they source and market mangoes for domestic consumption in the summer months.

The company grows table grapes in Piketberg (they experienced a big turnaround after the previous low volume season), also the regional hub for the group's deciduous operations (pome and table grape) in the Western Cape. 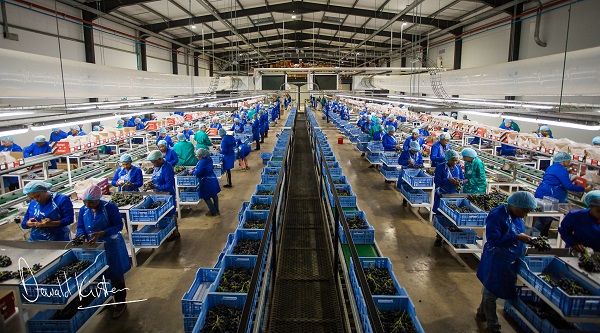 A new table grape packhouse on the farm Ambiance outside Worcester

TFFGSA also sources coconut and ginger for retailers; there has been a huge uptick in ginger demand over the past few weeks, Trevor says.

Smaller avo size brings welcome market differentiation
The backbone of their South African operations, the raison d’être for them being in the country, is avocados, accounting for about 70% of their local operations. They are the second largest avocado exporter from South Africa.

Avocado volumes for the industry is about 30% up on last year, and a count or two smaller but it’s not a concern, Trevor notes, and it shouldn’t erode value for growers. 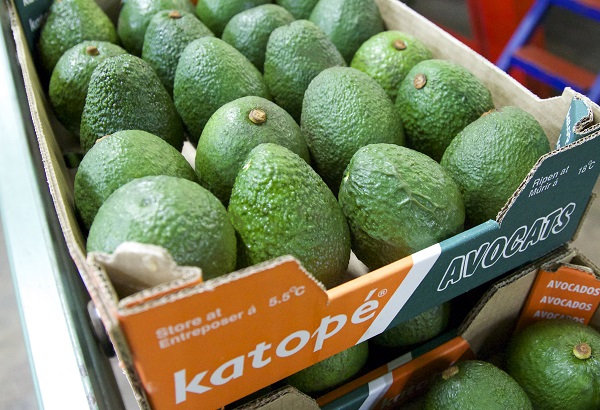 “It’s still early days, we’re just getting into the mid-season from the Tzaneen area, some of the Hass producers in late and mid-Mpumalanga area haven’t started in earnest yet. The crop is certainly smaller in terms of count distribution than during the record crop of 2018 when we had a large crop, but that overall is positive, I think some of the largest counts can be difficult to market because Peru tends to produce a bigger fruit and we compete with them. A slightly smaller curve is not a problem for the market, it puts us in a different segment in terms of what customers want.”

Alternate bearing poses a consistency problem
Trevor is, however, concerned at the last two years when the alternative bearing phenomenon was amplified. “The last two years were unique. The record crop of 2018 took us by surprise, there were tremendous volumes and all the stars were aligned. In 2019 we were well down, by almost 35%. South Africa needs to ensure that it maintains its shelf space and we need consistent volumes to do that. Alternate years pose a challenge and we need to flatten that through pruning and I think the new orchards as well as greenfield developments will help us even out that curve."

“We’ll be closely watching the European avocado market from weeks 17 to weeks 23 because that’s when the big volumes from Peru will be arriving alongside ours. The market has been very strong through the first quarter following the South American and Northern Hemisphere supply of Spain and Israel. During the early part of South Africa’s season prices were very strong. Of late there has been a decline in greenskin prices. The Hass price is still stable but we’re watching how that’s going to react to some of the volumes coming onto market from next week and the week after. Our exchange rate has been giving us some benefit.” 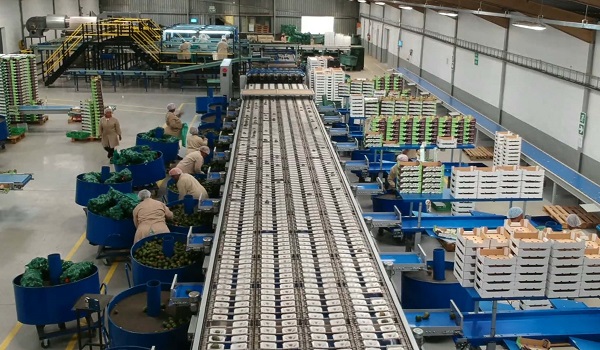 Avocado packline at their KwaZulu-Natal packhouse

He notes that some of the company’s deciduous marketing channels are coming in handy for avocado sales. “We utilise some of the Africa-East channels with the limited avocados that we do send to, for instance, Southeast Asia and Hong Kong. We have customers from our Univeg days with whom we work and with the interest in avos, we’ve been able to piggyback some of that supply through our deciduous channels. It’s been working well for us. When we have broader market access, TFFG is well-positioned to align all of our commodities and hit the ground running. Likewise in the US where Greenyard owns Seald Sweet, based in Florida.”

“Europe and the UK continue to be our home”
“Europe and UK continue to be our home. Over 80% of our avocados are destined for ripening programmes in Germany, Holland, France and the UK, week in and week out. The focus on retailer demand during the crisis period is a reflection of mature relationships built over time and with the growth we see coming, we’ll continue to pursue new market access which is good for everyone, to balance supply and to be competitive. We need other markets in terms of forex exposure and to balance a basket of fruit coming from orchards, but we do recognise that the EU and the UK have been tremendous partners and stakeholders for us, and will remain so for the years to come.” 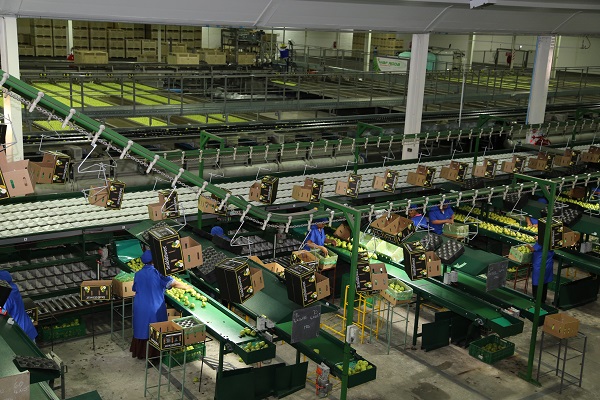 The Piketco packhouse in Piketberg, deciduous hub of TFFG in South Africa

TFFGSA is very strong in third party avocado supply (whereas they only manage their own apple, pear and table grape production). On the avocado farms owned by TFFGSA they grow about 20% of their avocados, the rest sourced from third party growers - some of the relationships with their growers go back 35 years. Complementing their own production, TFFGSA has four subtropical packhouses packing fruit for their grower partners in key production regions across the country.

“We’re taking a balanced approach, whether in the UK or in Europe, or in Africa and in the East, some of the other trading markets, because things change from day to day. So while opportunities could be there today, it might not be there while the fruit is on the water. We will continue to focus on our core markets and core receivers to consistently supply what they need to serve the end consumer,” he says. 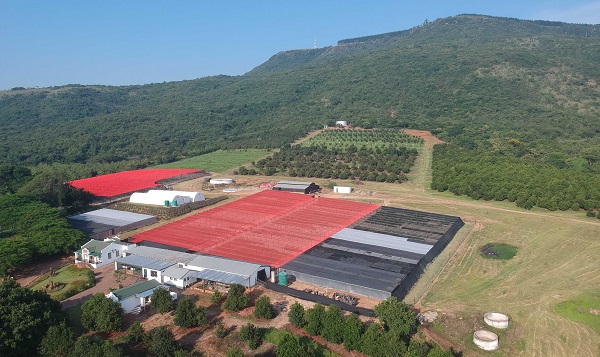 While Greenyard is their preferred receiver in Europe, TFFG in South Africa has complete marketing autonomy. They have a black economic empowerment partner in Tebogo Mogashoa whose Talis Holdings has an equity stake in TFFGSA.

"It gives us an element of the transformation that we need and it elevates the discussion we can have with some opportunities in the country and it also gives us the local context that we need."

He continues: “We’ve managed to produce, pack and export what we need to, more predominantly into Europe and the UK, with those more mature supply chains operating as expected. Our biggest concern is the safety and wellbeing of our people as well as business continuity at the same time.”