How Covid-19 is affecting Indian harbors 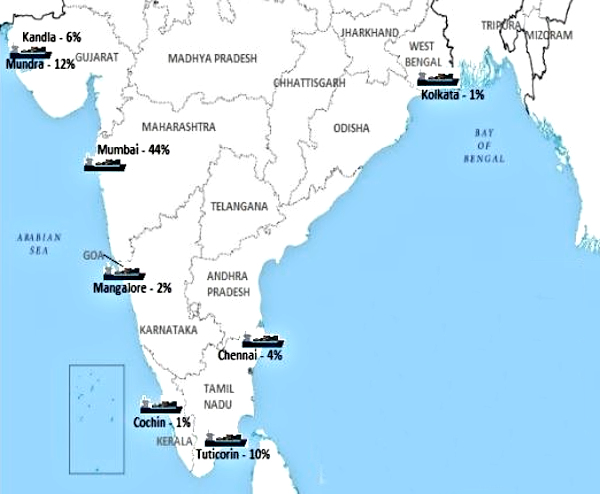 Mumbai: The harbor still had an enormous backlog. This was due to a lack of administrative staff, truck drivers, and crane operators. To reduce congestion, Jawaharlal Nehru Port Trust (JNPT) was moving containers from its terminals to nearby container freight stations. These were, however, reaching capacity.

That means global container shipping companies started skipping JNPT and Mundra Port. The containers were not being loaded and unloaded quickly enough. Local authorities began working to ensure that all employees and trucks have the necessary permits to move around freely. They must be able to work and move without police checks and delays.

Mundra: Congestion was increasing. Importers and customs officials were having difficulties clearing containers. The port's parent company is Adani Ports. It requested force majeure to be declared at the harbors of Mundra and Dhamra (in Odisha).

Tuticorin: The personnel shortage and shipping delays led to slow truck movements. The port issued emergency passes to agents. That was done to facilitate harbor access and boarding of ships.

Kandla: The Kandla International Container Terminal declared the circumstances an Act of God on 22 March. It is, therefore, not responsible for any claims, damage, and costs or problems. These may result from slower loading or unloading rates. The Kandla region banned all road traffic between 11:00 and 17:00. That means port workers had to adjust their schedules. It is difficult for customs officials to reach the harbor. They were urging state authorities to lift the ban for those involved in port operations.

Chennai: Port operations were restricted due to limited staff. According to local reports, the lack of truck drivers led to +50,000 uncleared sea containers. These are in the Chennai, Kamajarar, and Kattupalli harbors. Local authorities were working on bringing the drivers back. They also wanted to ensure the movement of trucks issued with police stickers.

Mangalore: Container movement was being affected by personnel and truck shortages. The harbor was to begin issuing passes. This is to ease traffic in and around the port.

Kolkata: The Kolkata Port Trust requested force majeure to be declared for 22 March to 12 April. As such, the harbor waived all demurrage. It will not impose fines on port users for delays. On 2 April, a harbor worker tested positive for COVID-19. That led to very few people showing up for work.

Cochin: Local importers reported there were no agents or truckers to clear or move products. The Cochin Chamber of Commerce and Industry reported decreases in imports. That was due to fewer containers from China. That affects export streams. These containers are used to export goods to harbors in the Middle East.