As a way to increase efficiency in the supply chain during times of unprecedented demand in grocery stores, many retailers have reduced the amount of SKU’s in their stores. “U.S. grocery stores typically carry 45,000 SKUs and supercenters infinitely more. Likewise, produce departments typically have hundreds of different SKUs at any given time,” Anne-Marie Roerink of 210 Analytics says. 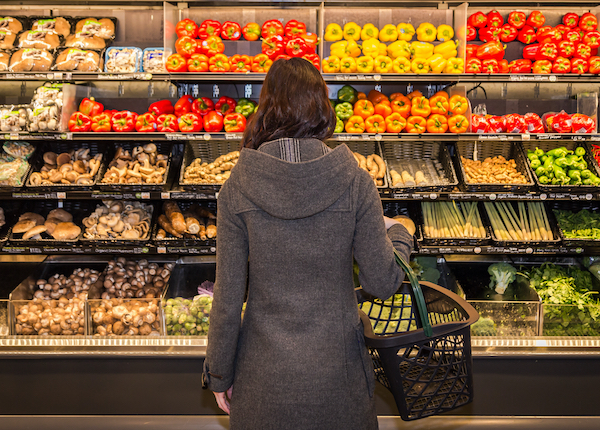 Increased efficiency in the supply chain
“During the weeks of panic buying in particular, inventory moved much faster requiring restocking all throughout the day. In addition, many stores at this point are down in personnel, the supply chain is down people, truckers, planners, etc., so everyone is looking for way to simplify operations. The easiest way to do that is to manage fewer moving parts, which in the case of a produce department means fewer SKUs,” she explains.

Reducing SKUs means reducing the variation of items that are stocked in the stores. Items that don’t have high household penetration are the first to be removed. The retailers chose to maintain the staple items, which also are seeing the highest demand right now. These are items like potatoes, bananas, onions, yams, berries, apples, etc. “In some cases, these items are brought in on drop pallets and take mere minutes to refill” Roerink says.

Alleviating packaging pressures
After reducing the items that have low household penetration, a second step in SKU rationalization is to reduce the amount of line extensions. Roerink explains: “These are things like different package sizes or types. For instance, in mushrooms, they may have only had the smaller containers with whole mushrooms rather than different sizes, whole, pre-cut, etc. Other retailers temporarily reduced their availability of organic SKUs. Yet others are stocking more private brand products instead of a number of different brands. These types of steps make the entire process easier, from buyers having to source fewer items to in-store personnel having less areas to keep up.”

This reduction in the line-extension also alleviates the increased pressure on packaging companies, as well as packaging manufactures. “Think about the companies that manufacturer trays and other packaging. Rather than having to turn over the line for a different color or different size tray, they’re able to produce millions of one kind versus a few thousand here, a few thousand there. Given that a lot of the demand has shifted from foodservice to food retail, these packaging needs are infinitely higher than they were before, so efficiencies like these can make a big difference,” Roerink says.

Low amount of impulse purchasing
Efficiency in the supply chain isn’t the only reason for reducing SKUs, however. Roerink shares: “A second reason for SKU rationalization right now is the fact that as the quarantines continue and shoppers’ fridges, pantries and freezers are full, we’re seeing a decline in the number of trips that people are taking. In Europe even more so than here in the U.S. Fruit, in particular, is an area where impulse plays a big role. That’s why you see these beautiful eye-catching displays that drive people to purchase fruits that they hadn’t planned to buy. But right now, stores don’t have the same foot traffic. Additionally, some shoppers appear to favor bagged items as they feel fresh fruits and vegetables may have been touched by other people. To limit the time it takes to stock the department and to prevent shrink in case impulse doesn’t do its typical magic, retailers may be dialing back on some of those items as well.”

While there are many good reasons to reduce SKUs and this process does have many positive effect on the supply chain during these times, it is creating challenges for some people too. “It makes forecasting even more difficult, which has implications for harvesting, shipments, etc. At the same time, it’s important to remember why stores chose to have a deep selection in the first place, which is differentiation. Stores typically seek to stand out from the competition in some way, whether that is value or having a differentiating assortment allowing consumers to find items that they cannot easily find elsewhere. So, while many stores are managing their SKU levels down at the moment, I imagine that once we’re returning to some level of normalcy, we will see many of those SKUs come back,” Roerink concludes.