Fruit export companies and farmers in the Western Cape don’t just have to deal with the financial impact of the COVID-19 pandemic; they also have to do battle with the grain chinch bug which has become a thorn in their side. Considered a hitchhiker pest that moves from wild grasses and wheat to various deciduous fruit cultivars, it contaminates the harvest and causes huge economic losses.

“Fruit exporters can, however, win the battle against the bug by fumigating plums, pears and peaches with the safe chemical ethyl formate without negatively affecting the quality of the fruit,” says Dr Renate Smit, a postdoctoral research fellow in the Department of Conservation Ecology and Entomology at Stellenbosch University (SU). She obtained her doctorate in Entomology at SU recently.

Smit says it’s important to find alternative postharvest treatments that are more environmentally friendly and effective because low temperature treatment against pests like the grain chinch bug can have a negative effect on fruit quality. She adds that the pesticide methyl bromide, which was used to control a wide range of pests on different types of fruit with great success, has been banned. 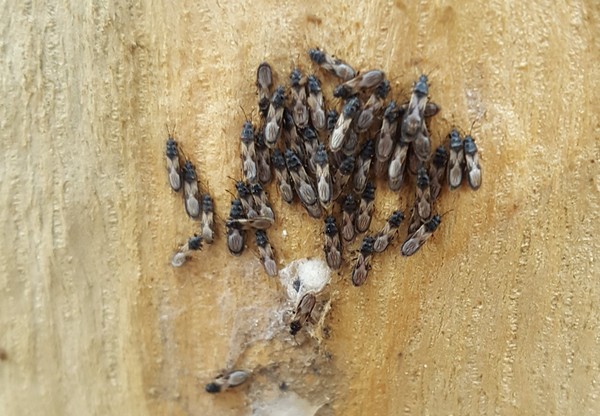 “Alternative technologies are crucial for our agricultural export industries to continue pest-free fruit trade, and maintain and expand international trade, especially if one considers that approximately 45% of the total production volumes are being exported to foreign markets.”

“Controlling the grain chinch bug is important because during the 2017/2018 season approximately 1800 cartons of pears earmarked for the USA were rejected due to contamination with grain chinch bug. In the same season a consignment of peaches was placed on hold due to this pest.”

As part her study, Smit investigated the potential of CATTS (Controlled Atmosphere Temperature Treatment System) and ethyl formate fumigation as ways to control the grain chinch bug. CATTS technology uses exposure to high temperatures for short periods, in combination with reduced oxygen and elevated carbon dioxide levels which disrupts the respiration of insects and ultimately kills them.

Smit found that CATTS treatment didn’t have the desired effect because the grain chinch bug was able to tolerate high temperatures and a controlled atmosphere. High temperature treatments also had a negative impact on fruit quality.

To initially determine the effectiveness of ethyl formate, she placed grain chin bugs in perforated microcentrifuge tubes which were then placed inside conical laboratory flasks, sealed with a stopper to create small fumigation chambers.

Smit used ethyl formate concentrations of between 0 and 150 grams per cubic meter (g/m3) to determine how the insects would respond. Concentrations of between 0 and 150 g/m3 were also applied to test the effect of ethyl formate fumigation on fruit quality in conjunction with insect mortality to determine at what threshold the chemical would become toxic to each fruit type and cultivar.

“Our experiments showed that a minimum concentration of 50 g/m3 for an hour is required to kill the grain chinch bug when fumigating with ethyl formate, this concentration has proved effective when upscaling to larger volumes such as shipping containers as well,” says Smit.

“Increasing the applied concentration to 100 g/m3 allowed the fumigant to penetrate and disperse within the packaging, killing all of the insects placed with packaged fruit. These results indicate that a higher concentration of ethyl formate was required to kill the grain chinch bug when it contaminates packaged fruit.

“A concentration of 50 g/m3 could, therefore, be applied to control grain chinch bug in unpackaged fruit, while 85 g/m3 should be sufficient for packaged fruit.”

Regarding fruit quality, Smit says the flavour of stone and pome fruit cultivars that were subjected to a taste assessment didn’t change.

“Ethyl formate fumigation provides an alternative method of control and would be much easier to apply commercially to control the grain chinch bug. The application of this technology will enable market expansion and allow access to markets currently closed due to this pest.”

She points out that ethyl formate has been used as a disinfestation treatment to control dried fruit pests since the 1920s as well as in commercial manufacturing of artificial flavourings for essences and soft drinks, such as lemonade.