Mushrooms from the conveyor belt

When production lines are modified or extended, suitable conveyor systems are often the solution for an individual plant configuration corresponding to the location. In this case, the aim was not only to rebuild an existing system elsewhere, but to achieve maximum flexibility through modular design.

In its eight ultra-modern factories, Scelta Mushrooms exclusively processes and refines mushrooms - for the world's 25 leading food companies, among others. The company is known in the industry for the natural preservation of its products and for its unique selling point of releasing the vitamin D2 available in mushrooms. 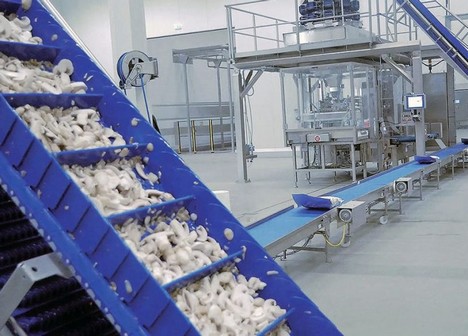 After the mushrooms have been vacuumized, they are transported in the bags, heated briefly at the end and thus preserved. In the Ecopouch pouch packaging they have a shelf life of about two years. (Picture: Dorner)

The task was to upgrade the existing production line at a new plant of the subsidiary Scelta Essenza in Venlo, the Netherlands. Here, mushrooms are preserved in their own juice in a special production process. First the fresh mushrooms are washed, cut and dried. They are then transported to a vacuum packaging machine. There they are packed in special plastic bags and then vacuum-packed. At the end of the line, the packed mushrooms - weighing up to 7 kg depending on the customer's requirements - are briefly heated to 126°C, thus making them durable for about two years. This method of preservation for processed mushrooms with the special Ecopouch pouch packaging is used exclusively by Scelta and sold to customers worldwide.

Modular design proves its worth
Before this could happen on the newly installed production line with various stainless steel conveyor belts from Dorner, however, there were a few details to consider. For example, the material flow to the individual food processing plant components was to be reconfigured. An additional requirement was that the entire plant configuration should be planned as modularly as possible, so that the production line could also be subsequently adapted. After only a short time, it became clear how right the idea of a modular design was. For reasons of production hygiene, the cleaning company that was involved wanted adjustments that could be carried out easily and, above all, quickly. 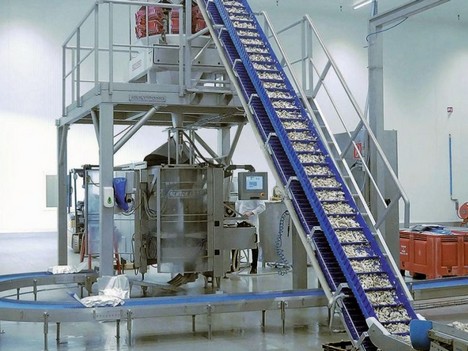 The washed, cut and dried mushrooms are transported on conveyor belts to the vacuum packaging machine.
Picture: Dorner

In the meantime, the plant has been running in two-shift operation five days a week for over a year without downtime. In addition to the quality of the conveyor systems, the operator appreciates the short reaction time as well as the supplier's great technical understanding in solving the individual task: Dorner required less than one month from the set-up to the completion of the nine non-identical stainless steel conveyor belts with and without curves.