German supplier FreshCup has again managed to expand its catalogue with two innovative juice squeezers. An apple juice press and an orange juice press are now being launched simultaneously. "With the additional items - such as bottles, fruit fly catchers and foam cleaners - we are supplementing the range and thus offering a complete solution so that the machines always look good and thus also ensure sales promotion," Franz Weber says of the Fresh Cup concept.

Contribution to the avoidance of food waste
Firstly, FreshCup is now presenting an optimised apple juice press from Dutch manufacturer Thompe BV: The system guarantees a very gentle and natural fruit processing, without preservatives, colourings or additives of shelf-life components. "Thus, the food retail trade now has the opportunity to process apples that are visually unappetizing or unsaleable, which also makes a considerable contribution to the avoidance of food waste," Mr Weber recounts. 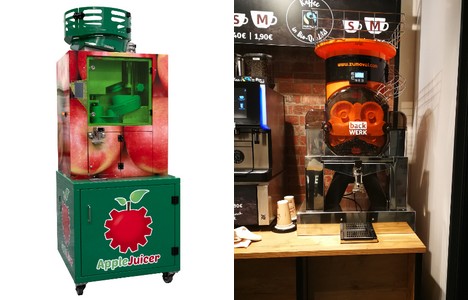 In the cold pressing process, an apple is first crushed and then pressed. This produces a 100% pure apple juice without any additives or admixtures. "After some time, the apple juice will discolour due to oxidation. This is just one of the quality characteristics that no additives are used," Weber says. The machine, which is mainly made of stainless steel, is also easy to clean and consists of only a few parts that can also be put in the dishwasher. The machine is also maintenance-free. 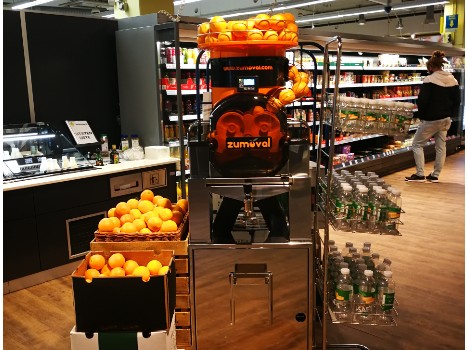 Easier and faster system cleaning
A second innovation comes from Zumoval and concerns an orange juice press with a built-in shower part. "We have now made it possible to operate the system with a water pump, even if there is no direct water connection. With the foam cleaner, a pre-cleaning can already be carried out, which dissolves all residues of fruit flesh and stuck juices on the back wall and in the pressing plant. This considerably shortens the cleaning time and makes cleaning itself much easier," Weber emphasizes. 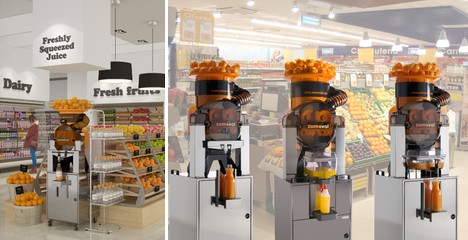 The design of the orange juice press has considerable advantages over the previously known systems. The front hood, made of tritan plastic, ensures high flexibility and elasticity, which ultimately results in less breakage and should reduce the cost of spare parts.

Fastest machine on the market
A cover is installed at the pressing stations of the orange juice press, which is why the orange juice is not sprayed upwards during pressing, but is directed completely downwards. Weber: "This keeps the front cover almost clean at all times and ultimately increases the juice yield. Another side effect is that no drops of juice drip onto the next fruit that is fed to the pressing plant. Furthermore, the feeder basket is designed in such a way that not the entire weight is on the turntable that feeds the fruit to the machine. This prevents too much pressure being placed on the lowest layer of oranges so that they are crushed if necessary." 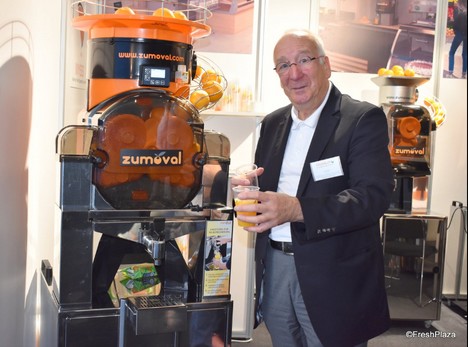 The machines are also available with a platform for placing them on a counter where the waste is directed downwards - counter installation module, according to Mr Weber, here at Anuga 2019.

Last but not least, according to Mr. Weber, the speed of the system should be mentioned. "With a speed of up to 45 oranges per minute, this is the fastest machine on the market. 45 oranges corresponds on average to a juice production of about 3 liters per minute."