The new apple variety Bigbucks, the fruit of which is trademarked as Flash Gala™ has had a strong first harvest. With more than 1.5 million trees already in the ground, the full-red Gala apple, discovered by Tru-Cape Fruit Marketing’s New Variety Expert Buks Nel, has remained true to type with zero reversions thus far. “As Gala types are unstable deep within their souls, we are especially pleased that Bigbucks has remained true with not one reported reversion”, Nel says adding, “When you plant ten Bigbucks trees you will end up with ten trees producing Flash Gala™ apples.”

And, while export clients in the Far East who especially like full-red apples are pleased, the success in the local market is particularly encouraging to the Bigbucks Grower’s Association. Chairman Calla du Toit, himself a grower and Tru-Cape’s Procurement Manager, explains: “As an early Gala, Bigbucks and its fruit fills a much-needed gap in supply from early February until the other full-red varieties come to fruition. The fact that they can be picked in one or two goes, is a major plus for the grower.” 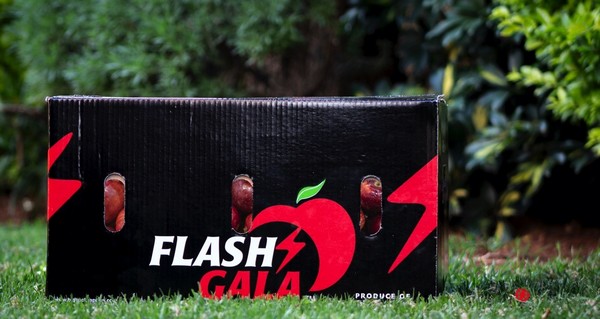 De Kock Hamman, Technical Advisor at Ceres Fruit Growers, says they have had the most success with Bigbucks picking at between 25% and 35% starch breakdown to indicate optimum picking ripeness. “As a full-red apple it is difficult to determine picking maturity based on colour, as we do with most apples, as this fruit is a full red from early on.”

Du Toit adds that because the Bigbucks Grower’s Association is grower owned, any lessons learned while in the field are shared among the growers so that they can all improve. Nel adds that while South Africa is an important market, Bigbucks is being tested in the United States, Chile, the European Union and Australia.” Hamman says that Bigbucks is a particularly good variety for the Warm Bokkeveld region of the Ceres valley. “Because it is an early variety it means we can harvest earlier and the grower can receive an early income too.”

Tru-Cape’s Quality Manager Henk Griessel says “With Flash Gala™ we have the opportunity to give the South African customer a full red apple. We even developed a colour chart to pack the fruit with the darkest colour under the brand Flash Gala™.”