Air freight from Latin America into the US experiences challenges

The coronavirus crisis has brought forth many different restrictions throughout the world. In Latin America, the precautionary measures range from mild to severe – some countries being in full lockdown, while others have instated curfews. The United States imports many different produce items from Latin America and fortunately, the general conclusion is that the imports haven’t experienced many negative impacts due to the situation, with regard to ocean freight. The air freight is seeing more issues, due to lower numbers of passenger flights. 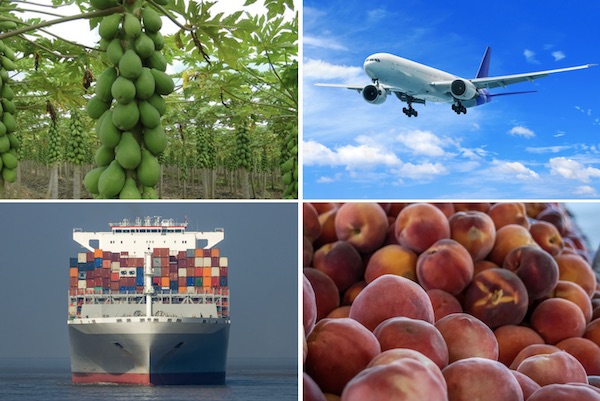 Slight delays on US shores due to port closures
The volumes of the products being brought in by ocean freight have remained steady for most companies, though there have been some minor delays. Bengard Marketing is located in California and is currently importing grapes, pears, and plums out of South America. Timothy Donaldson says: “There haven't been many issues with our imports. If anything, we’ve seen some slowing down on bringing in the product on our end due to port closures. We work with the Los Angeles and Long Beach ports and they are closed two to three days a week. This means that there’s been some delays on getting the product out of the containers.”

Craig Padover of New York based import company Jac Vandenberg also says they haven’t seen any impacts on the imports coming out of South America. The company is currently importing stone fruit from Chile. “The product is being loaded as planned and being discharged as planned. It is taking a little more time to discharge the product to ensure that the safety and health standards are being maintained but it’s been so far so good.”

Padover remarks that they’ve seen more volatility on the demand side for these products, but that the supply side out of South America has been steady. This is echoed by Michael Warren, president of CAPCO Farms, who says: ““We have had to decrease our shipments due to erratic demand.”

Container shortages not an issue
While there was an initial worry that there would be major disruptions in imports and exports due to container shortages, this doesn’t seem to be an issue now.  Warren says: “The issues with container shortages were short-lived. With the overall reduction of cargo, the shipping lines have maintained consistent availability.”

Concern about Mexico
Vision Import Group is based in New Jersey and are importing limes from Mexico. Ronnie Cohen shares: “Mexico is definitely a concern because so much produce is imported from there. They have been a bit behind the other countries with their rates of infection, but in the coming weeks it could easily become bad. Growing areas are more rural, of course, but people still move around and the products need to be moved too. So, if the pickers and packers are affected then the imports would be affected too.”

He adds: “Produce will remain available either way, but there is currently a lot of unknowns. In the US the unknowns are about the demand and distribution of the products. But so far there haven’t been any disruptions, and there’s even many more truck drivers available right now to move product, because there is a lot of other products outside of the food supply chain that aren’t moving right now.”

Air freight poses challenges
Due to the travel restrictions put in place to prevent the spread of the coronavirus, the number of passenger flights running between the US and South America have decreased significantly. Since passenger flights often also carry produce shipments, this has limited air freight availability.

Edwin Gonzales of Crown Global Corporation says: “We are a Brazilian Grower of Brazilian Solos papaya and ginger and usually have shipments coming in every week, but we are now very limited due to the airlines cancelling flights. This has caused a shortage of air shipments. The rates for the flights that are running from Brazil to the US are much higher too, and these flights often have limited space. We have been impacted a lot by the coronavirus. It has been difficult for us to supply our customers – there is plenty of product but getting it to the US has been very challenging. The prices of our products have gone up higher than ever too, because of the steep airline rates.”

CAPCO Farms brings in their products from Central America, and company president Michael Warren shares that they haven’t seen higher rates on the actual flights, he says: “the cost within the infrastructure to get to the airport is higher, but the air freight rates aren’t higher. Also, there is less freight space.”

“All the shippers are taking greater measures to maintain food safety and workers’ health. The bottom line is that fresh produce and a healthy diet do improve the immune system. Industry associations and members are working aggressively to reach consumers with that message,” Warren concludes.

Cohen adds: “The industries down in South America in general are all working really hard to keep everything running smoothly and as normal as possible.”