After the colder days, which slowed down the growth of the asparagus, the conditions are once again ideal. "The asparagus season is slowly coming on. The German government's compromise solution of allowing 80,000 seasonal workers to enter Germany under strict hygiene conditions is bringing some relief to the asparagus farms again. We hope that the good cooperation with seasonal workers from Germany and abroad will enable us to have a satisfactory season in line with the circumstances," explains Simon Schumacher, Chairman of the Board of the Association of Asparagus and Strawberry Growers of Southern Germany. 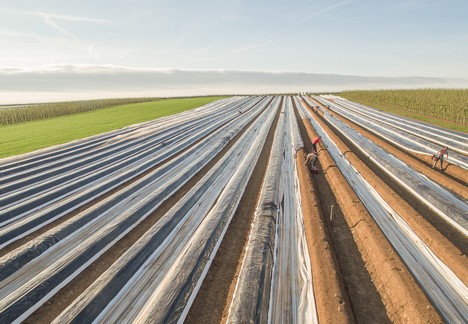 A look at the asparagus fields / Picture: VSSE e.V./Christoph Göckel

Following initial talks with retailers, Michael Koch, Deputy Division Manager and Asparagus Market Expert at Agrarmarkt Informations-Gesellschaft mbH (AMI), has a positive opinion: "Under the circumstances and apart from the loss of sales to the catering trade, the asparagus season has got off to a good start. During the Corona crisis, direct marketing from the farm and the weekly markets have so far worked well". According to the Agrarmarkt Informations-Gesellschaft, the degree of self-sufficiency for asparagus last year was an impressive 86%; it is the only vegetable species that is produced and consumed to this high degree in Germany.

Uniform growth
Asparagus expert Dr. Ludger Aldenhoff attests that this year's noble vegetable is of good quality: "So far, the asparagus has grown nicely evenly. With all the restrictions imposed by the harvesting problems, we will have asparagus at Easter and really get into the season after Easter."

Review of the 2019 season
According to the Federal Statistical Office, the asparagus harvest in 2019 was 130 563 tonnes, which is almost 2 per cent less than in 2018. Meanwhile the area under asparagus cultivation was about 2 per cent smaller than in 2018 (at 22,975 hectares), with a yield of 5.68 tonnes per hectare, which was the same as in 2018. Last year, there were a total of 1660 asparagus-growing farms in Germany (2018: 1779 farms), which cultivated a total of 27,338 hectares of cultivated area (including young plants), which is about 4 per cent less than in 2018, with a simultaneous decline in the number of growers of just under 7 per cent. These figures continue the declining trend of the past year.