With the increasingly nice spring weather, the harvest of fresh German fruits has really taken off at the member farms of the Landgard producer cooperative. The first fresh regional cucumbers and tomatoes from unexposed protected cultivation were available in smaller quantities since the end of January and the end of March respectively. In mid-March, fresh aubergines were also harvested for the first time in the Lower Rhine region.

Thanks to the many hours of sunshine in recent weeks, the main harvest of mini and regular cucumbers, cherry and panicle tomatoes has now begun. Minicherry, Roma and Roma bunch tomatoes will follow next week. It is expected that the first fresh cocktail and panicle tomatoes from North German producers will be on the market from mid-April. At the beginning of May, Landgard member companies will start harvesting fresh square and pointed peppers. 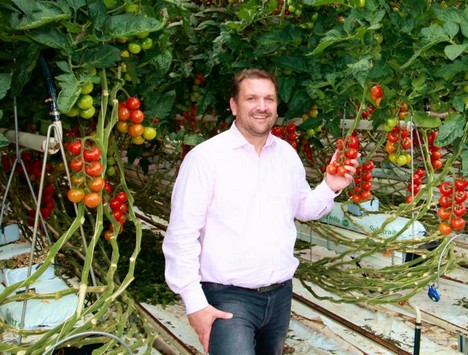 Carsten Knodt, member of Neurather Gärtner and deputy chairman of the Landgard supervisory board.

Positive effect of the weather
"As the months of January and February were very dark, the starting signal for the harvest this year came a little later than 2019," explains Carsten Knodt, member of the Neurath gardeners and deputy chairman of the Landgard supervisory board. "Thanks to the many hours of sunshine over the past two weeks, we are now catching up quickly, so that we are expecting good quantities and above all a great quality of our tomatoes and peppers overall". A lot depends on having enough experienced helpers available. "For the first smaller quantities we are still getting by with the teams that are already on site. At the end of April, when the main quantities are expected, things will of course look different. The new entry regulations for foreign seasonal workers, which have just been passed by the politicians, were therefore also extremely important for us. Now we have to implement the associated requirements and regulations in such a way that it is acceptable for everyone," says Knodt.

Alternative harvest workers
Markus von Cleef, responsible for the mini-cucumber cultivation at the Van Cleef family farm, explains why available local labour can only replace the experienced harvest workers from Eastern Europe to a limited extent: "In general, we have had good experience of using schoolchildren and students in the cucumber harvest. Therefore, we are currently still well-positioned and we can harvest our cucumbers in large quantities of good quality, even if the market is complex due to the corona crisis. However, when classes at schools and universities start up again after Easter, this flow of temporary workers will be eliminated. In addition to this, the different crops and cultivation methods place very different demands on the workload, expertise, stamina and physical fitness of the helpers. Newcomers from outside the industry, who are often only available by the hour, cannot replace skilled harvest workers who have been working full-time on the farms during the season for many years. The current situation therefore poses very special challenges for each farm in its own individual way." 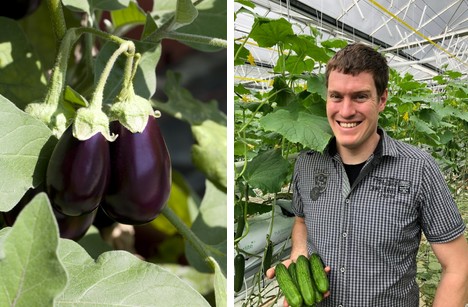 Left: For the first time, fresh aubergines could be harvested on the Lower Rhine. Right: Markus von Cleef is responsible for the mini-cucumber cultivation in the family business van Cleef.
Picture: Landgard Pictures

Fruit cultivation on 120 ha
A total of around 120 hectares of greenhouse space at the Landgard member companies provide high-quality cucumbers, tomatoes, peppers and aubergines from regional cultivation. Especially in view of the effects of the Corona crisis, the reliable supply of the population with fruit and vegetables from domestic cultivation is more important than ever. In close cooperation with trade associations, political representatives and partners, Landgard, as a marketing producer cooperative, has campaigned on a broad front for the entry regulation to be modified so that seasonal workers can re-enter the country if all hygienic and medical conditions are guaranteed. "Only with united forces and political support could we achieve this," emphasises Labinot Elshani, Chairman of Landgard eG. "We therefore expressly welcome the compromise found in the interest of our member companies, the entire green sector in Germany and the securing of the supply of fruit, vegetables, flowers and plants."