A few weeks ago, panic buying, especially of those classic stock products like potatoes and onions, were the dominant trend. In the meantime, the market situation has returned to some degree to

normalcy and with it sales of organic potatoes, observes Nicolai Timaeus, sales manager at the Bavarian marketing company Bio-Bauern LLC. "We are also pretty much through with our old organic potatoes in Bavaria, so that packers now have to buy more and more from other regions - mainly Lower Saxony."

The discontinuation of out-of-home catering in the wake of the Corona crisis in the Bavarian region has caused a major sales market to collapse completely. Timaeus: "Finishing potatoes - such as French fries and peeling potatoes - have been a growth market for us in recent years, so we are of course feeling the effects of this. Sales of organic chip potatoes seem to be excluded from this."

Expansion of the production of table potatoes
In general, according to Timaeus, the market for organic potatoes in Bavaria certainly has growth potential. "We serve a large market with many people and have a good group of buyers. Organic is very much in demand in Bavaria, and at the same time, regionally produced food is very popular. These are already two important purchasing arguments on the part of the consumer that we fulfil." Accordingly, Timaeus confirms that cultivation is gradually being expanded in terms of area. "The area for processing potatoes is currently stagnating, but the cultivation area for table potatoes has been significantly expanded in recent years." 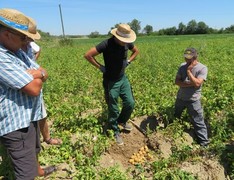 Marketing company Bio-Bauern - the Bavarian producer association for Bioland wheats, potatoes and onions - mainly markets potatoes with the Bioland trademark, which are almost exclusively grown in Germany. Thus, the marketing organisation is dependent on the stocks in the domestic growing areas. The prices for table potatoes currently fluctuate around € 65-70 per 100 kg free packing plant.

Organic onions & current investments
Organic onions from Bavarian soil are also marketed via the marketing company. According to Timaues, growth rates are also noticeable in this sector: "The organic onion sector is growing, but not to the same extent as the organic potato market. The decision of Aldi Süd to offer only organic-quality red onions from last season onwards has also made itself felt on the markets. Organic red onions are extremely popular at the moment. Nevertheless, the lion's share of our production volume is still yellow onions."

Just as with potatoes, stocks of organic onions are now slowly running out. In about three weeks the cold stores will probably be empty, then there will be the switch to imports from Holland, Israel or Egypt. "We will then offer regional onions from the new harvest for the first time by the end of July - beginning of August. We will be able to start with organic potatoes much earlier, which means that Bavaria is sometimes massively underestimated. In some cases, we can deliver organic early potatoes in market-relevant quantities as early as June, but we are increasingly investing in cold storage capacity and later varieties so that we can also deliver at the end of the season."

Long-term consequences of the Corona crisis still uncertain
The corona crisis will also have an impact on the further course of the season for organic potatoes and onions, Timaeus believes, the extent of which is currently still uncertain. "I am optimistic for the Bavarian sector so far, because all programs are planned to the end. In this respect I don't see any major problems coming up for the time being."