Robo snack could be an opportunity for Nigerian watermelon industry 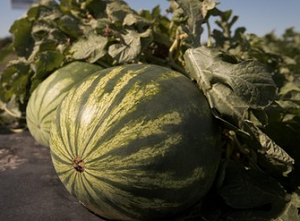 Watermelon production in Nigeria in recent years has increased tremendously, unfortunately there is little or no industrial uses of the seeds. A team of scientists from Ton Duc Thang University (Vietnam), Lagos State Polytechnic and Federal University (Nigeria) has evaluated the nutritional composition, physico-chemical and sensory properties of Robo (a Nigerian traditional snack) produced from watermelon seeds in order to improve the utilization of watermelon seeds in producing value-added products, acceptable to the consumers. Robo is traditionally produced from the seeds of melon and is widely consumed in the western part of Nigeria.

For the study, watermelon seeds were dehulled, dried and used to prepare Robo in the laboratory and compared to control samples prepared from melon seeds commonly used in Nigeria. The proximate analysis, amino acid profile, vitamin, mineral and heavy metal profile and consumer acceptance of the Robo samples were determined using standard methods.

Results showed that there were no significant differences in the proximate composition of the Robo samples from watermelon and melon seeds, while significant differences were found in amino acid, vitamin and mineral profile. The amino acid concentration in g/100 g crude protein for lysine, arginine and leucine were 4.58, 1.82 and 4.92 respectively for Robo produced from watermelon seeds while 4.91, 2.01 and 5.16 respectively were for Robo produced from melon seeds. Generally, Robo samples resulted having high amounts of vitamin B-complex and minerals and low amounts of heavy metals.

"This study showed the good quality and consumer acceptance of Robo prepared from watermelon, specially, the findings have confirmed that watermelon seeds could be used for the production of Robo as a promising raw material. This will create a ready market for the underutilized watermelon seeds as well as creating more income for watermelon farmers and stimulating the economy of the nation," say the scientists.