We are still owed a party

Manter celebrated its 25th anniversary on Wednesday 1st of April.  The party that the company founders, Herman Wehkamp and Peter Lenferink, had planned for their customers, contacts and relations will be put on hold for a while. “We had come up with an entire program, but that is currently not possible because of the corona virus,” says Herman. 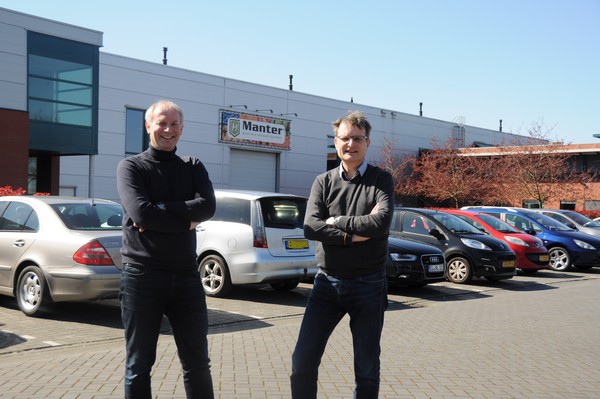 Herman Wehkamp and Peter Lenferink started Manter 25 years ago on the edge of the business park in Emmen,The Netherlands.

In 1995 Herman and Peter, previously active as machine builders, decided to start for themselves, and hired a warehouse in Emmen to build their own weighing and packaging machines. “We had a picture of where we wanted to go and what our company should look like,” says Herman. “Our company grew rapidly after that and we soon had to recruit additional people to help us in the company.” 25 years later, the company employs approximately 200 people from 5 locations and supplies them in 70 different countries worldwide.

Fast growth
Herman can still remember that the first rental property was soon too small for Manter. “You don't do our work from a hobby shed, but the rented shed quickly became too small. In sunny days, we drove the machines outside with a forklift to assemble them outdoors. In the evening we picked up everything and drove it back inside. It soon became clear that we had to move into a larger building and after three years we built our own assembly hall and office in Emmen.”

“In our 25 years, we have always remained close to our core business and therefore also to our customers: the weighers and packers,” says Herman. “While there were many opportunities for us in those years, we decided to focus on building good machines for weighing and packaging. At Manter, the interests of the customer always come first and that will continue to be the case. This is the only way we can gain and maintain the trust of our customers.”

Packaging and automation
There are a number of developments that Herman noticed in those 25 years. “We saw a lot of packaging that was popular at first, then almost completely disappeared and then came back strongly. Like paper around the year 2000, it disappeared and is now immensely popular again. Or how about the prefabricated net bags (Linobags) for onions? They seemed extinct in the long run, but later came back due to the development of machines that can process these bags. What has continued to grow is the demand for further automation from our customers. Labour is becoming scarcer and solutions are being sought to automate processes. This has been particularly striking in the last 5 to 10 years with a step towards the total automation of some machines. Think of our Autopack, which required manual attachment of the bags. These automation question is also a development that will continue in the next 25 years in which machines will communicate with each other even more. This is also the reason that we, as Manter, have taken an interest in Solidtec, a manufacturer of palletising installations, in order to arrive at an integral solution for our customer.”

A party for the customers is not yet possible because of the corona pandemic. This does not seem to pose any problems for employment within the company as yet. “We notice that our customers are busy packing at the moment, so it is our job to support them with maintenance and service. Sales also continue as usual. This is because the degree of automation in the warehouses varies greatly from country to country. The countries that are lagging behind in this are now trying to make up for the backlog by investing in machines.
This allows them to absorb the loss of workers that's on sick leave. At Manter, we have a well-filled order book and we monitor the situation regarding corona closely. The material flow has been ordered to date and we do not expect insurmountable problems either. We are therefore still optimistic about the future.”