A shift in market requirements for potato industry

In light of the coronavirus outbreak reaching the UK in January 2020 there has been significant development, ultimately changing the way the potato industry has been functioning. At first, the changes were slow but once the government started enforcing stricter guidelines things quickly changed.

Overall traded volumes jumped up from week commencing 8th March with the increased retail demand offsetting drops from food-service.
This could be short lived with many customers likely to be well-stocked and potential for retail requirements to drop back to more normal levels. This would mean the effects of a drop in food-service will more likely be felt.

From the week commencing 8th March, volumes of potatoes traded started to ramp up. The weekly average price survey (WAPS) showed a week-on-week rise of 20% in the overall volume of potatoes traded from ex-farm and has since remained relatively stable. The big shift, was what sector the volumes were moving through.

We have seen a huge increase in the retail demand for potatoes which has seemingly offset the drop off in food service requirements. With many restaurants and food outlets being forced to close their doors it is no surprise that this sector has shrunk in the potato industry.

This poses the question of what volumes of potatoes were grown and are available for the required markets?

Planted area breakdown
Taking a quick look back at the planted area by variety and sector data collected early on in the season we can say that 37% of the planted area was intended to reach the packing market. The more concerning figure is that of processing and bags for chipping, which together made up 41% of the area.

The top ten varieties grown in 2019 make up over 40% of the total area. Six of those top ten are chipping, frying or crisping varieties and made up 19% of area. Unsurprisingly the most widely grown variety remained as Maris Piper in 2019/20 accounting for 14% of that planted. This variety is deemed multipurpose which could allow easier transition between market sectors depending on its post-harvest treatment. 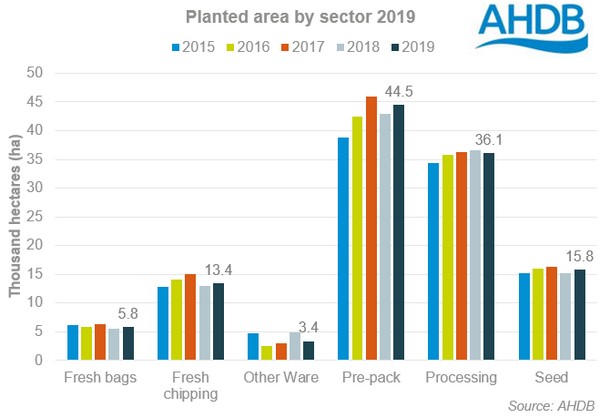 What was left in January?
The end of January stocks survey showed that overall stocks were up 3% from the 5-year average, estimated at 2.13Mt. There was some differences depending on sector and the packing sector actually fared the best to cope with a spike in demand, in terms of stock available. Estimated at 882Kt this sat at a level not seen since the big production year of 2017.

Despite relatively low stocks levels at the end of November, a reduced drawdown rate meant the bags and chipping volumes still in store at the end of January were higher than that of 2018/19 but below 2017/18. At the time, this meant that it seemed the pressures of potential under supply had eased. However, now with the loss of the chipping market for the foreseeable the pressure swings the other way – to an oversupply.

Sector switches
With fresh chip and significant amounts of French fries volumes not required anymore, could we see a shift in the movement of potatoes initially destined for these markets into other sectors?

For some growers, there is the ability to sell into other sectors. However, there are some important considerations that need to be made. There are some limitations for potatoes that have received CIPC treatment. Potatoes that have received more than 2 treatments (>24g/tonne) of CIPC will not be able to move into the fresh packing/ware market under current regulations. For potatoes treated with less than this, there are different limits that must be observed (visit our website for more information). Also the packing market generally has different requirements to processing or chipping, such as a better skin finish. And finally those that are growing under contract, may not have the flexibility to market their potatoes on the free-buy market. Based on the planted area data the majority of potatoes grown, destined for the processing sector are grown on contract.

Processors and buyers of fresh chipping material that already service the packing market may find it easier to switch their volumes between processing and packing. Those lacking pre-existing contracts with retailers may find it harder to shift volumes down this avenue.

Not only has there been some movement of frying material, treated with mint-oil, moving into packhouses for retail but there has also been a sway in the 25kg bagged ware market. With some shoppers attempting to avoid the ques of supermarkets there has been increased footfall at many farm shops. Not just this but there has also been an uplift in growers selling direct to the public. This is where we have seen some chipping material move in place of the lost orders from chip shops.

Short lived
However, the reports of panic buying and a large uplifted in the sale of 25kg bags of potatoes, it is expected that many consumers will be well supplied for the short-term. This will likely see the ease of ware sales along with a drop in retail demand back to more normal levels.

This means the effects of the closure of many food outlets will become more apparent over the coming weeks if the packing and bagged ware sectors no longer offset this demand.

Domestic Market Update
The past month (March) has been quite the rollercoaster for the country and the potato industry has been no exception. The first week of March remained relatively stable but from week two, traded volumes ramped up. In weeks two and three, overall trade seemed up, but this was heavily weighted to the retail sector and also the 25kg bags (ware) sector.

As the coronavirus situation escalated, so did the rules set out by the government. Many food service outlets were forced to close, along with schools and most hotels. Large events were also cancelled, adding to a reduction in demand for processed supplies. When chip shops were forced to shut their doors, the chipping market completely disappeared for most suppliers as only a few could offer a delivery service. 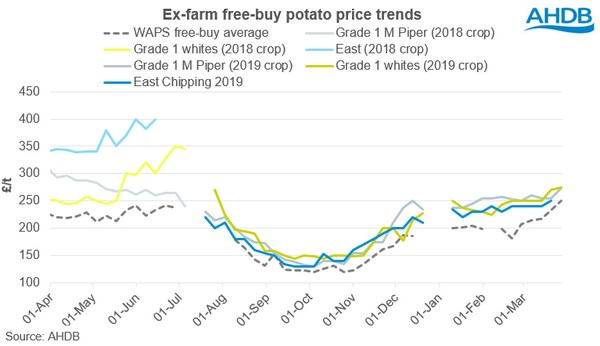 There were many reports of “panic buying” and keeping retailers stocked was increasingly difficult. Some consumers were also turning to farm shops and direct to growers for 25kg bags. Weeks two and three saw a huge upturn in this demand.

With chip shop demand pretty much ceased, some chipping supplies were being sold as ware to meet local demand. Also, some processing supplies were seeking new markets and traditionally non-packing varieties such as Markies were making their way onto supermarket shelves.

Free-buy prices for packing supplies saw a rise throughout the month, along with bags for ware prices. Some contracts were being brought forward to help with the supply of material into packhouses, but there was still significant demand for free-buy material.

Towards the end of the month, the packing trade did seem to ease a little. With many shoppers now well-supplied and stricter regulations in place at supermarkets regarding shopper activity, it is likely there will be a change in shopping behaviours. There is a potential that frequency of shopping will drop but basket size may rise. Should retail demand return to a more normal level, the full effects of the loss of the food-service sector will really be felt.