For mid-period grape regions a season to remember, for the right reasons

For the Berg River, it has been a season to remember - near perfect weather conditions during the harvest and their biggest crop ever, says Clayton Swart, communications manager at the South African Table Grape industry. The Orange River and Olifants River regions also had good seasons – particularly welcome to the latter, acutely affected by the past drought.

Table grape vineyards outside Clanwilliam, in the Olifants River region

In fact, it was rain that put a spoke in the wheels of the two regions that bookend the South African grape season, the Northern Provinces region and the Hex River region.

In the summer-rainfall Northern Provinces region rain is always expected during harvest, and producers take plentiful precautions in the form of plastic covering of vineyards and so forth, but this year the rain was so persistent that a reduction of 1.5 million 4.5kg cartons was inevitable.

In the Hex River region summer rainfall is not expected, and through sheer luck their season started early, so that early varieties were largely harvested at the time of the unseasonal rain. That cost the industry a further 2 million 4.5 kg cartons.

Their early season benefited them in other ways too, for some Hex grape packhouses finished before the national Covid-19 lockdown started. Other Hex River packhouses will finish their season in a week or so.

Clayton notes their relief that food production is classified as an essential service under lockdown regulations, allowing their producers to get their crop off the vine.

China trade down, but less than originally feared 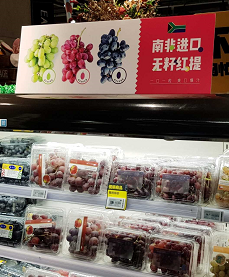 Much attention has been focused on China since the market opened for South African grapes more than six years ago, but it still accounts for only 5 or 6% of South Africa’s total exports.

Since trade slowly got going again at the end of February, the impact of the coronavirus was less than initially feared but there was a reduction in the amount of grapes exported to the Far East.

“We are actually quite pleased with our export figures this season,” Clayton says, “and this season again showed the benefit of a climatically diverse spread of table grape production regions across the country.”

The industry has passed the 65 million carton mark, surpassing the high end of their third crop estimate for the season. If it weren’t for the impact of rain, they could well have reached the initial high end of their first estimate of the season, 67.8 million 4.5kg cartons.

“We’re very happy we were able to take off a handsome crop, despite the challenges of the season like loadshedding (which is better now) and the coronavirus. South Africans are used to making alternative plans.”