The berry market takes a hit during the coronavirus pandemic

Mexico produces raspberries year-round. Most producers are located in the central region of the country, and a few growers also have farms in Baja. FreshKampo produces steady raspberry volumes out of Mexico 52 weeks out of the year. Eli Nunez says: “The volumes may vary month to month by around 10-15%, but the supplies are pretty steady throughout the year and there aren’t any big peaks or lows in the production.”

Changes in consumer shopping habits
The company started producing in Baja two years ago and have been seeing good volumes. Nevertheless, Nunez shares that the past week, week 13, has been a very tough week for the berry industry. He says: “Nobody has seen a week like this one. The issue is not the supplies – we have good supplies and they are good quality. But everything that is happening in the market because of the pandemic has had a huge effect on us.”

One of the reasons the berry market is suffering is because of the change in the consumer shopping habits, Nunez explains. “Retailers are making sure that they don’t have too many shoppers in their stores at once, and this is making the shopping trips much more time-consuming for the consumers. So, they’re not returning to the stores for a quick trip multiple times throughout the week and if they’re not able to pick up berries on their first trip they won’t return for them the next day.”

He adds: “The consumer demand for the berries and most of other produce has all of the sudden changed. This due to the consumers adapting to the new “new,” which is reflected in their shopping habits. Retailers continue to adapt to the increase of infection cases by county and how each county is changing the way they let shoppers into their stores. This has slowed down the demand, which has come almost to a halt.  Although terminal markets have not shut down completely, they have become ghosts due to the shutting down of restaurants across the country and the complete disappearance of terminal markets.  Most of the ‘price after sale’ business has disappeared and food banks can’t handle donations anymore, so this has led to a lot of product being thrown away.” 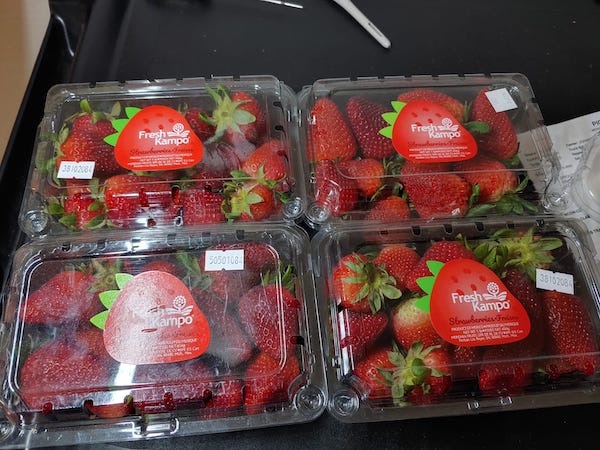 High volumes coming up
To add to this, the strawberry volumes are looking to be increasing soon. “Baja will continue to produce strawberries and then the California production is kicking off right now and the volumes are going up. We have oceans of strawberries, but retailers have nowhere to put them. The market is really low right now and producers are having a tough time with the pricing. For the bush berries, like blackberries, the supplies will be lighter during the month of April which means these will likely experience less difficulty than the strawberries in the market, but all berries will have to adjust to this ‘new’ situation,” Nunez concludes.