April 2nd is Love Your Produce Manager® Day and especially now that in-store employees are working overtime to keep shelves stocked and shoppers fed, it is the perfect time to show gratitude for the produce department team and recognize all the hard work they are putting in today and every day. 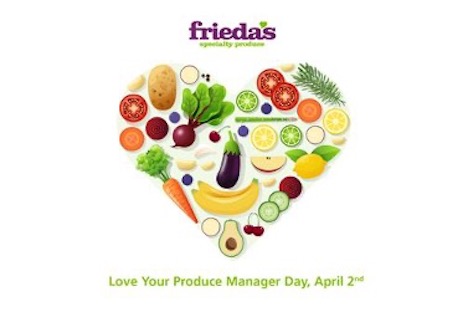 Now more than ever, in-store produce teams need to remain motivated and inspired. The extra time and effort they are putting in is making a big difference and these teams deserve recognition for a job well done. This is why Frieda’s created the holiday in 2012 to recognize produce managers—highlighting the hard work they put into their departments to keep them fresh and stocked all year round

“The inspiration for LYPM came from when my mother Frieda introduced the kiwifruit to America in 1962. A shopper at a Safeway store asked their produce manager to locate what is now known as kiwifruit. The produce manager and produce buyer connected with Frieda, who was able to locate the first shipment of the fruit and, as they say, the rest is marketing history,” says Karen Caplan, CEO and president (and Frieda’s eldest daughter).

Frieda's has provided a few ideas for recognizing produce teams for the holiday:

Frieda's asks that everyone takes the time to visit their stores on April 2nd, to show appreciation for the produce teams and highlight their hard work.