"People don’t have to accept that high rate anymore"

The last couple of weeks has seen a very busy period for the logistics sector. Road haulage companies have had to deal with a spike in demand as well as border restrictions in Europe and no more double manned cabs due to social distancing rules.

“Fresh produce haulage companies with supermarket programs were very busy, some saw an uplift in programs of as much as 300%,” explains Jack Fleming from Chill-Chain. “The peak coincided with Mother’s Day, which always sees an increase in demand for transport anyway , but now volumes have fallen off and are almost back to normal. A lot of drivers are becoming ill which has reduced capacity and cab sharing is no longer allowed so a truck coming from Huelva which would have been doubled manned now can only have one driver.” 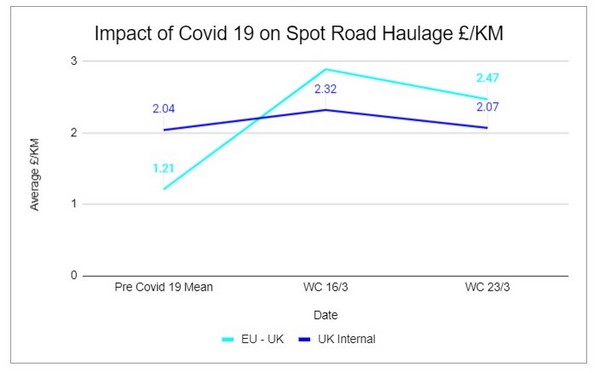 On the other side of the equation smaller fleets who don’t rely on the supermarkets are seeing much lower volumes as there is no other trade, it is similar for those who had contracts with the food service companies and now we have the situation where some hauliers are desperate for work.

In situations where there is high demand for road freight and a build-up at ports or borders the Chill-Chain system works really well as they have developed tools to facilitate the management of spot and contract volume. It is free for growers, fresh produce companies, and transporters to put a load on the system and receive a quote back, they in return take a small commission. Additionally the spot market gives shippers an immediate overview of where the market is at, in real time; “At the peak people were accepting a much higher price, some road transport from Spain saw an £800 increase, but they were confident to do so because they could see the position of the market and knew they weren’t overpaying, relative to the average."

“We are fortunate as we can see the friction at the borders and see where there is capacity. The haulage industry is now in a more stable state and people don’t have to accept that high rate anymore, the rate is still higher than pre-crisis, but we believe we can get the rate back down to normal. It is now a case of supply and demand and the market has levelled out. It has become easier to get produce through the borders and ports, there are still delays and its tough but not the end of the world.”