Cecilia Manzanillas grew up in a banana farming family in Ecuador.

“My father was farmer who taught us how to work the land and how to do it with care. I also learned a lot about discipline, about how to work and care for the environment and also how women can be a part of the banana industry,” says Manzanillas.

That last idea began with his own daughter. In 2004, Manzanillas’ father gifted her with one hectare of land to produce bananas and it is land that, 16 years later, Manzanillas is still producing bananas on.

Today, Manzanillas is a banana farmer as well and board member of the AsoGuabo, a small producer organization in Ecuador (the co-op is one of three working with West Bridgewater, Massachusetts-based Equal Exchange). She also works directly as an ambassador of AsoGuabo with community groups such as schools, health clinics, and a women's entrepreneurship group. And in her 26 years in the industry, she’s seen women come a long way in banana producing in South America. 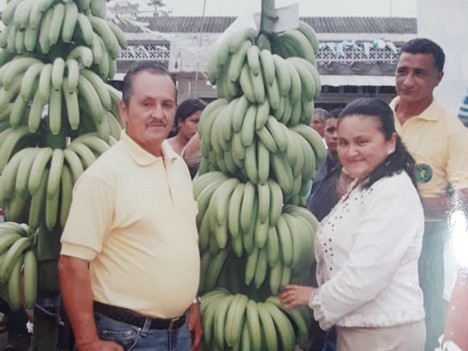 Old experiences
In her early days in the industry, Manzanillas says women weren’t necessarily discriminated against. “But there was not as much participation from women. Women weren’t really involved in the agriculture or fieldwork,” she says. “But since then, women have really earned their place in the industry.”

This wasn’t unique to the banana industry however. Even in her town of 15,000 people, few women were involved in leadership roles. However, over time, this has changed. “Now women are being taken into account and make decisions,” she says. “Women are being listened to more here. We have more gender equality today and we’re more involved and considered valuable for our contributions.”

In fact, in 2013, Fabiola Ramón San Martín was elected as the first female president of the AsoGuabo for two consecutive terms and that in its own right, broke many barriers for women. “A lot of people were able to see the work that she did and it shone a new light on why it’s important to have women in leadership,” says Manzanillas. Today, the cooperative has 127 farmer members and 35 of those are women. (The board of directors also has five women as directors.) 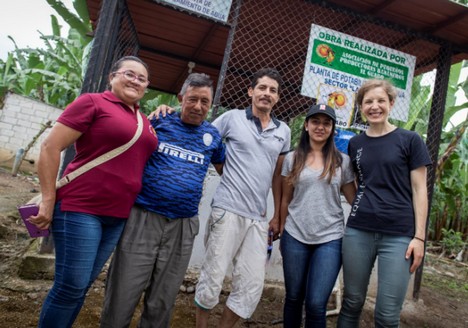 Manzanillas (left) with the team from Equal Exchange.

Expanding the role
While banana production is what Manzanillas is focused on, her leadership role within the community also has her involved in newer banana-related initiatives. These came about following a trip in the late 1990s when she traveled to the Dominican Republic to visit fair-trade cacao producers. “I saw groups of women working there making different cacao products and that motivated me to think about doing that in Ecuador,” she says. Now, Manzanillas says there are female entrepreneurs in the community who’ve created and marketed different types of banana-related products.

Manzanillas’ leadership role within the banana producing community also involves an increasing focus on the environment. The company is currently involved in plastics recycling—they collect plastic dropped off by farmers and used in the harvest and work on recycling that plastic to help pack bananas and other uses in various stages of production. (Manzanillas is also focused on social projects within her community, such as working with people with disabilities and in eventuality, hopes to build a center in her town to support those less advantaged.)

However, Manzanillas ultimately hopes that the banana industry in Ecuador will continue to attract women to work in the sector. “My hope and dream for women is that they keep on engaging in every part every day in every field,” says Manzanillas.