How the drop in foodservice demand is affecting produce suppliers

The effect COVID-19 has had on the foodservice industry is well known by now. With institutions such as schools and arenas closed and restaurants shrinking their operations, the effect is significant on the fresh produce industry.

“On the foodservice side, we’ve seen about an 80 percent decline in business,” says Ely Trujillo with Superior Growers LLC of Las Vegas, Nev. “Foodservice providers are still trying to manage their accounts but take-out and drive through is not enough business to keep it going the way it was before.”

Within five to six days of U.S. President Donald Trump declaring a national emergency on March 13, Trujillo says orders dropped fast. “We went from 4,000 cases/week of foodservice to about 400 cases,” he says.

Trujillo adds that while restaurant drive through and take-out options are still available, consumers remain skittish. “The number of people going out to eat isn’t as large because they’re worried someone sick is preparing their food. They feel more comfortable making that food at home,” he says.

Dealing with inventory
At the Produce House LLC in Nogales, Ariz., Raquel Espinoza also noticed another factor in the movement of food. “Some customers in the foodservice sector, because they lost their restaurant orders, they had to get rid of their inventory and were looking at any which way to sell it,” she says. “It was all so fast and the foodservice side of the business has pretty much disappeared by this point.”

At the same time, shifts were happening on the retail side of the business thanks to customers “panic buying” large quantities of food. “There was inventory. But then the restaurants started closing down and at the same time and there was more demand on the retail side,” says Espinoza. “That consumed whatever inventory was left. I don’t think I ever depleted my inventory the way I had two weeks ago.”

Espinoza also says demand continues to shift at the retail level. “Now there’s no demand. The retail end has stopped purchasing the way they had because consumers are not going out to the grocery stores the way they were two weeks ago,” she says. 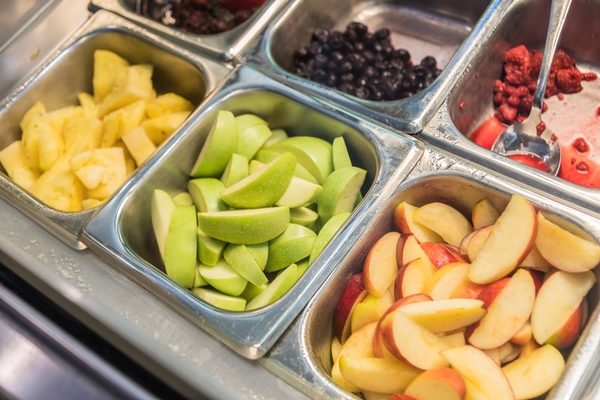 How are people eating?
Trujillo sees the same. “People are eating at home and making smaller amounts of food because they’re worried. They’re not indulging,” he says. “They’re making just enough to feed the family and that’s it. People are more conservative with their dollars and what they’re buying. And we’re also seeing people buy more canned goods and shelf-stable items over fresh produce.”

If anything, these retail trends illuminate the importance of the foodservice half of the business. “The foodservice sector is a good balance to have in the industry. Not having that balance in the marketplace causes an imbalance,” says Espinoza.

Indeed, as Trujillo points out, the way the two sides purchase make up that balance. “Retail purchasing takes volume. People go out and buy and cook. But with foodservice, they’re the ones that buy a little bit of everything. So it’s like a shopping cart,” he says. “They don’t just buy a bulk amount.”

So where does all of this leave growers, shippers and marketers? Trujillo notes that companies are laying people off or offering furloughs until the business returns. “Some growers in Mexico are laying people off at the field because there’s not enough demand for us to fulfill,” says Trujillo, who adds that for Superior Growers, it’s treating the situation as though summer has arrived since his company is seasonal in Nogales. “So we get small fast. We cut any expenses we can and employees that are no longer servicing a need we furlough at this point,” he says. “We’re hoping the business will come back at the end of April and into May to try and make up what we’ve been missing.”

The longer term effect
Looking ahead, Espinoza is concerned that these demand and supply shifts could trigger a domino effect in the industry going backwards. “Product in Mexico will be sold in Mexico for example or it’s going to be supplying whatever we need at this time. There’s no market so we don’t harvest what we don’t really need,” she says. “There could also be a shortage at some point too.”

Obviously though, demand for fresh produce will return at some point. “We all have to eat,” says Espinoza. “But there are a lot of people left without jobs so they have to decide what they want to see on their tables. Is it canned and frozen food versus fresh produce?”