Stone and pome fruit growers fight against the night frost

"Frost protection irrigation should minimize the damage of the cold snap"

In many European fruit-growing regions, there was an acute cold spell in the last few days. In many places, minus temperatures were recorded for several nights in a row, which will certainly have its effect on fruit products. Especially in the top and stone fruit sector, the night frost could ultimately lead to considerable harvest losses and damages for fruit producers.

Austrian apricots: 'Next days and weeks will be decisive'
In Marchfeld, Austria (northeast of Vienna), the coldest night of the current cold spell so far was recorded from Tuesday to Wednesday (-4 degrees). At the moment, one can find both good and damaged apricot blossoms, says Manfred Harbich, owner of the fruit growing company of the same name.

The dedicated fruit grower himself tries to protect his crops by means of frost protection irrigation. "Stone fruits - especially apricots - are usually somewhat more sensitive to frost than, for example, top fruits because of their early blossoming. For this reason, the current cold spell is particularly disadvantageous in connection with the relatively early full flowering of our apricots. Whether and to what extent damage has occurred in the end, however, will only be known in the next few days. This time of the year -late March, early April- is decisive for the further course of the season in this sense."

According to Harbich, the "new" apricot varieties from southern Europe -which have been introduced to the market in recent years- are generally much more sensitive to frost. These apricots need less cold stimulation in winter, so they sprout earlier. Well-tried varieties such as Bergeron -the main variety of the Marchfeld fruit-growing company- seem to be losing some of their popularity, but are easier to protect in the event of a cold spell. Due to the considerable sensitivity

of apricots to frost, it is not uncommon for high failure rates to occur during the final harvest in summer. This has a corresponding effect on the prices: "If you have sufficient quantities in such a season, you can sell your goods at very reasonable prices." 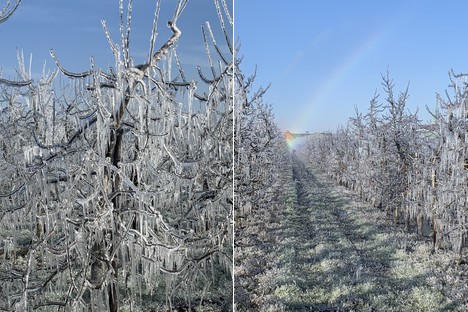 There are two common methods for protecting the blossoms in fruit growing: In frost protection irrigation, the plants are sprayed with very fine water droplets in a targeted manner: When the distributed water is frozen, the heat of the crystals forming is released to the plants, protecting the blossoms from frost damage. In the second frost protection method, the flowers are heated with small ovens with briquettes or with paraffin candles to counteract damage. However, alternatives to frost protection irrigation play hardly any role in commercial fruit growing / Picture: Elbe Obst

Altes Land: 'Frost is still to be expected in the next few weeks'
In the Altes Land, the first companies have already switched on irrigation in the night from Saturday to Sunday, and from Sunday onwards almost all of them. Most farms have -2oC as a guideline for switching on the frost protection irrigation, reports the management of Elbe Obst. In the case of a later flowering stage, the system is switched on earlier. The temperatures were already in the minus range in the evening over the last few nights, so that the temperatures were checked very carefully early on to decide whether to switch on.

The Altes Land cultivation area is mainly equipped with irrigation, with the commercially available top fruit varieties almost all irrigation is used. The water is brought in via a system of large and small pumps on the Elbe or its side rivers to the producers' irrigation ponds. "So far there have been no surprises: the frost warning system has worked perfectly, so that no negative consequences are to be expected due to the frost during flowering. However, frost is still to be expected in the next few weeks." 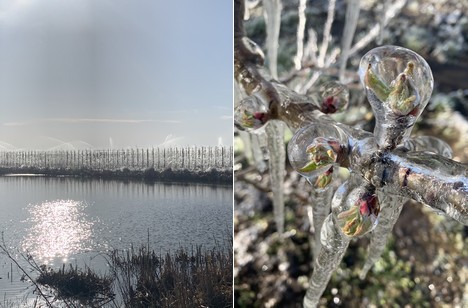 In any case, the proximity of the Elbe and its tributaries to the temperate waters already provides greater protection than in locations outside the Altes Land, but this would not have been sufficient in the current weather situation. For next weekend, slightly higher temperatures are announced, so that there can probably be a break in the protective irrigation. For next week, however, colder nights are announced again, so that further irrigation nights are planned.