International trade in goods is necessary, even during the Corona crisis

Germans have a great appetite for fresh and inexpensive food from all over the world - and the range of products on offer in the supermarkets is just as large. As the Statista graph based on data from the German Farmers' Association shows, Germany can meet the demand for many products from its own production, like potatoes, cheese, pork, wheat and butter.

Particularly in the case of fruit and vegetables, however, the country is dependent on imports to meet demand. Here the so-called degree of self-sufficiency is below 100 percent. This means that imports from other countries are necessary to fill the shelves in the food retail trade. The chart thus also shows how important the free movement of goods between countries is - even in times of the Corona crisis. 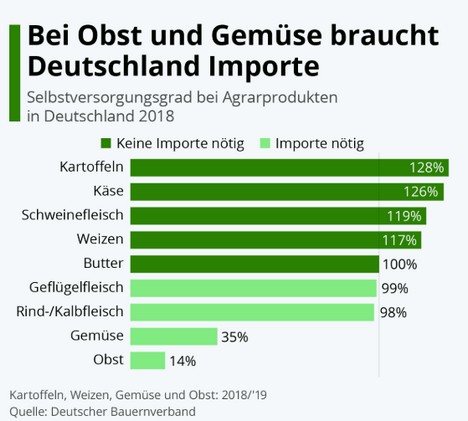 Recently, long traffic jams have occurred at the inner-European borders because many states have begun to close these. However, the movement of goods is supposed to flow. On Monday, the EU Commission published guidelines for goods traffic in the Schengen area. Among other things, it recommends that states reserve separate lanes for truck traffic at their borders.