Australian grapes to be on sale in new stores in Japan

Australian grape producers, Budou Farms will have fruit displayed as part of the opening of new stores at two supermarket chains in Japan; Y’s Mart and Ito-Yokado, from this week.

"We are working in some marketing campaigns in other speciality stores too, as our brand is recognized by consumers: 'Tenshi no Budou' (angel of grapes)," Co-Owner Enrique Rossi said. "Also, this year we are trying a new shape of a cluster in Hong Kong which has been very well received, however, this will be a very niche small market, but got us excited as I think, we need to introduce new ways to sell our produce." 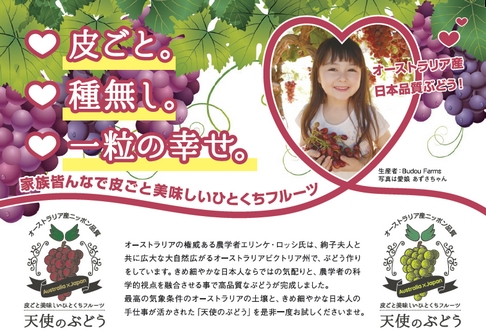 While 99 per cent of the company's produce is supplied to Japan, he added that other markets have shown interest such as Malaysia, South Korea and Vietnam,

"We intend to start shipping to them next year, due to the delay of the season this year, did not match to their programs or the necessary arrangements for it," Mr Rossi said. "Other things we have been trying, is to minimize the usage of packaging, not using bunch bags and having the fruit with stems up, we think this way minimizes the usage of plastic, and improves the quality of the fruit, having less condensation, less barrier for temperature and also improving sulphur dioxide generated from pads that move inside the box, achieving a better post-harvest life of our produce."

Mr Rossi says that the company also still uses 'the old way' of stamping the boxes, rather than labelling with stickers,

"At the same time we admit we mostly use Styrofoam boxes, and yes might not be the best eco-friendly option, but in some places, they are reusing the box for other purposes, so it does have a better option for it and we are working in how we can do some more with it," he said. "This has been a learning curve for our customers, as we are always looking for different options." 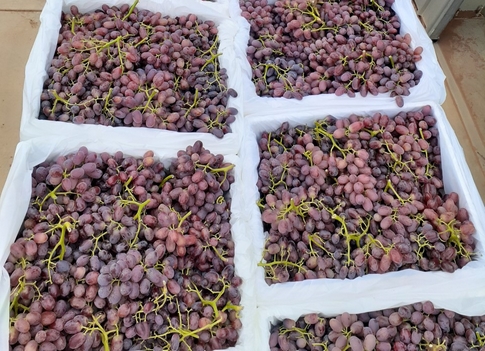 Budou Farms sells 100 per cent to export markets, as Mr Rossi says the Australian system for domestic sales is very limited to a handful of supermarkets, that source from a handful of suppliers.

"It is not being very accessible, transparent and competitive for a small player like me," he said. "Meanwhile, we tried the local wholesale market in the past but found we get better returns and faster payments overseas than domestic. The risk is different, but we like adrenaline."

The Budou Farms' owner is also keeping an eye on the future of the grape industry, and what it will look like in the five years. Mr Rossi says there may be a "frenzy of new varieties" to attract new consumers. But he advises if Australian grapes do change to new varieties, as all other countries are doing, once the frenzy is over, only quality and consistency will be the key.

"It's a hard question, as it has changed so much in the last five years," Mr Rossi said. "I think consumers are looking for new things, shape and flavour, however, the one that most endure is the last one. Not sure if fortunately, or unfortunate, the huge range of new varieties might make consumer confused, as they remember colour and flavour, but sometimes due to this huge range, the stock rotates and then they cannot access of what they liked before. Hopefully also in a near future will be an improvement for market access so Australia can take even more advantage of the conditions that make our grapes extra sweet facilitating trade with Asia, as we are so close, therefore I think all these events of improvement of markets access, new varieties, consistency and quality, will allow Australia to grow in the future with no doubt."