The flavour of New Zealand oranges has been immortalised, with the taste and flavour being used in the iconic Tim Tam biscuit.

Gisborne fruit and produce supplier First Fresh supplied the fruit, which has been used directly in the biscuit - and the selection even caught the company's managing director Ian Albers off guard.

"It was a bit of a mystery at one stage for us too," Mr Albers said. "Essentially, what happened was that we were asked to provide a quantity of navel oranges to a freeze-drying company. At that time, we had no idea what the product was going to be used for or anything like that. In early December, we actually got the call from Arnott's to say that they were going to be launching the Tim Tam with Gisborne oranges in it, which got us pretty excited." 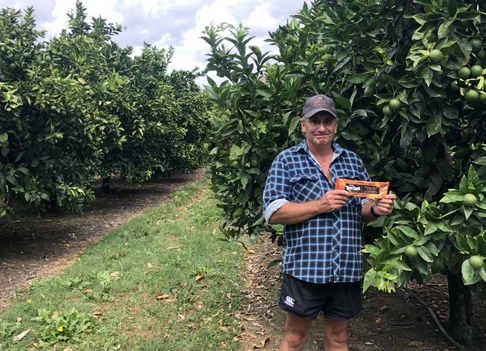 As part of the launch, the biscuit company showcased some of the Gisborne growers, including Murray Burgess, who is part of the largest navel growing area in New Zealand. Looking back through the traceability, Mr Albers says that there were probably 12 growers who supplied fruit for the Tim Tam consignments.

"We think Gisborne oranges taste pretty good," Mr Albers said. "For us, it is always around that depth of flavour and having a good balance between sugars and acids to give the overall profile. So, ultimately, they have probably heard on the grapevine that our oranges taste pretty good. It has delivered a good deal of publicity for citrus growers in general. It's nice for the Gisborne orange taste to be immortalised in a biscuit. It's good for the region, and we are getting a lot of good feedback from the biscuits, especially the taste."

Arnott’s confirming that there was a lot of research that had gone into testing the best raw ingredients from local farmers and businesses for the Tim Tam Crafted Collection range, which were sourced from some of the best regions across Australia and New Zealand.

“Because of rich soil and basking in over 1,500 hours of sunshine, we heard whispers that Gisborne navel oranges were one of New Zealand’s best-kept secrets," Arnott’s Spokesperson Amy Wagner said. "They’re known for having a fantastic tasty flavour, with a good balance of acid and sugar. That’s why we went to the top orange-growing region in New Zealand to help us launch Tim Tam Gisborne Orange and Dark Chocolate. We worked with a number of Gisborne growers, who provided around several tonnes of parent navel oranges, that were then sent to a New Zealand-based processor where the fruit is freeze-dried."

She added that consumers "across the ditch" have been so excited about all the new and indulgent flavours from the new Tim Tam Crafted Collection.

"We hope our Kiwi Tim Tam fans love them just as much, especially now we’ve immortalised your renowned Gisborne navel oranges in our own much-loved chocolate bikkie,” Ms Wagner said.

First Fresh is preparing for the upcoming citrus season, beginning with the Satsuma mandarins.

"We will kick off in late April, and that will roll into lemons, starting early May," Mr Albers said. "The navel season is towards the end of June, maybe July, depending on where things are at. General crops are pretty good this year. We have had pretty good weather, including a hot dry spell throughout January and February. Fruit size is looking good and fruit finish is pretty clean. All in all, we are heading towards what should be a decent sort of crop."