“We’re thinking about entering the Middle-Eastern market next season”

The organic apple sector in Poland has had the same challenges as conventional apple exporters have had to deal with. The season might end a couple of months earlier than last year, when the country was dealing with a bumper crop.

The troubles of the Polish apple season did not just hit the conventional apples. According to Natalia Bagmut, commercial director for Ewa-Bis, the effect was also felt in the organic and industrial sectors: “The season was more challenging as there was much less crop than we’re used to. The organic industry sector, with apples destined for juice, was hit severely. There was about 70 per cent less volumes for these crops. Still, the volume of organic puree was just enough to keep customers satisfied. The organic table apple has much more competition from Italy this year. This season we also expanded our portfolio to include organic pears. Under our brand Grupa Owoce Natury we’ve exported 7,000 tons this season, which is a similar amount to last season. The most popular varieties this season have been Golden, Gala Royal and Jonagold, for pears the popular variety is Conference.”

Due to the lower volumes, Bagmut expects the season to be wrapped up a couple of months earlier compared to last year. “Next to the big challenges of dealing with lesser volumes this year, another issue was the quality of the apples in Poland, especially in the second half of the season. This can be explained by the weather conditions of 2019, but this is why we’re planning to finish the season by the end of April of 2020. To give you an idea of how the contrast compared to a bumper crop, for the season of 2018 apples we finished in the summer of 2019.” 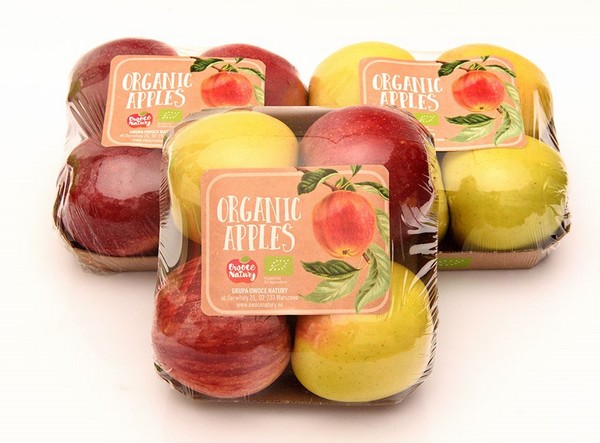 With the season almost over, Bagmut thinks ahead in the hopes of a better 2020 season. They would love to get a foothold in a non-European market. “This season we’ve focused mostly on the European markets, having Germany as the first player in the market. However we’re thinking about expanding in the future, this will be depending on the quality of fruits. If they’re good enough, we’re thinking of entering the Middle Eastern markets. This market already knows Polish fresh fruits and they really like their taste. However popularity is also increasing in Europe, as our table apples and apples destined for puree are getting known more and more. Our goal here is to maintain high standards thanks to quality, long availability up until May and a fair price to go with it.”

With the coronavirus dominating the news, Ewa-Bis has taken several measures to keep their employees safe. However Bagmut has also noticed an increase in demand: “We strive to strike a balance between panic and common sense. The safety of our employees is a priority for us. The company's management board introduced regulations based on state ordinances as well as crisis regulations of the company's work during a pandemic disease. We have modern tools that enable our employees to work in the Home Office mode. From a business point, we have seen a significant increase in the orders from customers. As consumers are stockpiling food supplies, it makes sense we see a reflection of this in the orders.”