Says Ben McLeod, Global Sales and Marketing Manager for Mr Apple, “With China as one of Mr Apple’s largest export markets, we have seen the challenging conditions across all channels in China but have been moved by the commitment and hard work shown by all during this difficult time. We have been in discussions with our Chinese partner, China Resources Enterprise, to come up with a meaningful way to say thank you to those in Wuhan and to show, even in small way, our support for their efforts. 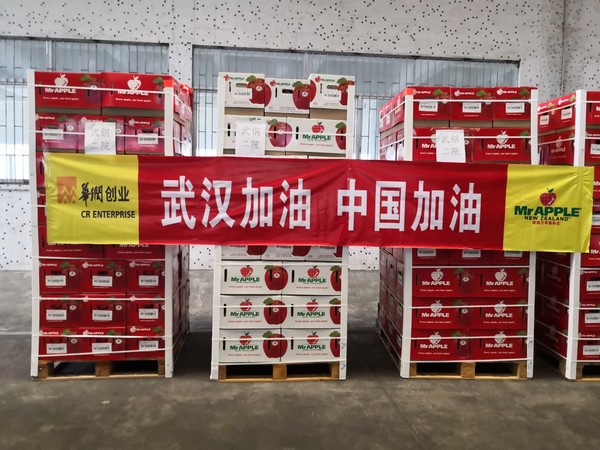 “They say an apple a day keeps the doctor away and with our first apple shipments just now arriving in China, it made sense to donate a container of fresh apples to multiple hospitals in the Wuhan region to keep them in good health, inspire good spirits and let them know Mr Apple New Zealand and China Resources Enterprises are thinking of them and thanking them for their commitment.”

Despite the challenging situation in China, Mr Apple remains committed to supporting their key strategic partners throughout this period. Says McLeod, “Given what we’re seeing and hearing in China we’re reasonably optimistic China will recover and bounce back better and stronger than before.”

Mr Apple’s season kicked off in China in February with a small air freight shipment of new, early variety Posy, which was sold online mid to late February. By early April, Mr Apple is looking forward to the first shipments of new variety Dazzle heading to China and expect this new, robust, deep block red apple to quickly take China by storm.

Globally, Mr Apple reports the 2020 apple crop is looking beautiful and global shipments out of New Zealand are increasing daily. Average fruit size is up from 2019 and apple colouration is fantastic, with consistently red, deep coloured fruit.