At the Wiskerke Onions’ office in Kruiningen, the Netherlands, Jaap Wiskerke has the relevant figures at hand. He wants to use these to explain the latter half of the season. Armed with these statistics, he can compare seasons. “In the onion trade, collecting data is important to come to the correct decisions,” says Jaap. 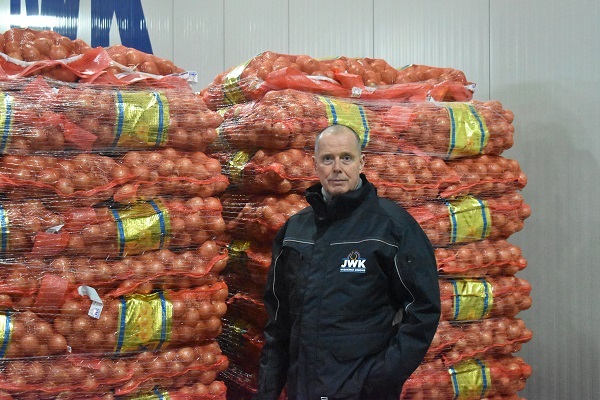 The Wiskerke Bureau of Statistics
“I have been tracking yield per hectare, the onions’ taring, exports, prices, etc. since 1980. There has been a significant difference between the first and second half of the season in the last five to six years. That is all thanks to Russia. Up to 2014, large volumes of Dutch onions went to Russia in the second half of the season. The onion sector in the Netherlands could, therefore, continue at full capacity."

"We process about 40,000 tons of onions per week in the Netherlands. However, from week 52, this was reduced by 20,000 tons because Senegal shut its market. Every year, larger volumes are sent to that country. That is evident in the figures. They show that in week 49, in the Netherlands, onion processing topped the 40,000-ton mark.”

Jaap updates his information digitally. He brings up this onion season and that of 2017/2018’s weekly overviews. The latter can be considered a reference year. “Let us look at a ten-week average in the 2017/2018 season. You can see that about 35,000 tons of Dutch onions were exported in the first half of the season."

"Now, consider the average between week 5 and 14 in the season’s second half. Then, sales only amounted to 18,000 tons, on average. That is happening this year again. We can see that an increasing number of onions are being traded in the first half of the season.”

It is mainly the price that differs
There is, however, a clear difference between this year and the 2017/2018 season. “The price,” states Jaap. “Look at the last season, that of 2017/2018. You will notice that, compared to the same period this year, prices were approximately €0,091 lower in February. In March, this was €0,096 and it April it was back at €0,11. We had several contracts in cultivation then. After that, prices sank dramatically to €0,08 at the end. It is obvious to see we were left with a surplus.” 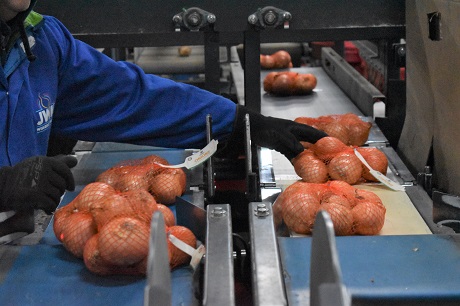 Grower prices started higher in 2020. “Now, I cannot even buy onions for €0,13. Grower prices are at roughly the €0,15 level. That is more than €0,06 higher than in the previous, representative season.” Jaap can, however, explain this abrupt price increase. “It is all thanks to the disaster in India this year.”

“The Indian government strictly regulates India’s onion trade,” explains Jaap. “That country has more than 1,2 billion inhabitants. Its onion consumption is many times higher than that of the Netherlands. Also bear in mind - there is no substitute for onions like there is with apples, pears, or potatoes. It is then no wonder the Indian authorities keep such a firm grip on everything.”

“Growers have to sort their own onions and bring them to market to sell. Due to this regulation, data in India is kept even more precisely than in the Netherlands. In November 2018, I started following these Indian stats. That country, after all, grows the most onions in the world."

"You then see the Indian market requires between 35 and 50 million kgs of onions per dag. But, on 4 November 2019, that amount was 15 million kg. People were paying the equivalent of €0,31 for the poorest quality onions and up to €0,57 for the best," explains Jaap.

"In week 45, 20 million kg were making it to the market per day, at an average price of €0,47. These shortages kept growing, and the prices climbed even more alongside. With a six percent shortage on the market, onion prices shot up by 46%. At its height, people in India were dealing with a 624% price hike and a shortage of 44%.”

What followed was a total ban on Indian onion exports. “Usually, the exporters have to pay a fine if they export onions, while there is a shortage on the local market. But, this was a total ban. At the same time, the money generated from these fines is put in a kitty," continues Wiskerke.

"The Indian government then rewards exporters who export onions when the local market is saturated. There are always two sides to a story. Because, in the same vein, prices can also sink when there is a surplus on the market. All this is done to ensure Indian farmers keep cultivating enough onions.” 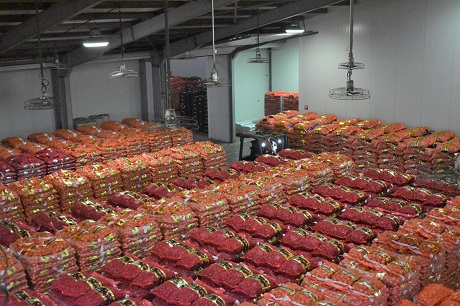 Onions prices in India are slowly recovering but can still not compete with Dutch onions. “In week 1, prices were still at €0,61, and in week 5, grower prices In India were at an average of €0,40. This upward trend meant that India was to have remained closed for exports until the end of February," says Jaap. "There were elections midway through February in that country too. The Indian government will want to prevent onion prices from shooting up again.”

This situation and higher export volumes in the season’s first half ensured Dutch farmers got good prices for their onions. The CBS also released a definitive harvest estimate for sowing onions at the end of January. This estimate was adjusted to 50,3 tons per hectare. “You must, however, recalculate these figures," Jaap goes on to say.

"For example, last year, CBS estimates were, according to my sums, 4 tons above the actual yield per hectare. Otherwise, it would not be in line with the annual outages average. The CBS does, however, provide the most accurate yield estimates. In 2019, they predicted 53,1 tons per hectare, and at the end of January, this was adjusted to 50,3 tons per hectare. With this adjustment, farmers, of course, want a better price for their onions.”

The future
“I expect that, in the future, this will happen more often. If you look at farming in India, you see that growers already have to dig 20 to 25 m down to access a water source. The soil is rapidly silting up and can no longer absorb water, with all the consequences that entail. We need to look to the US for cultivation methods," advises Wiskerke.

"There, they grow high-quality onions, using drip irrigation, in dry parts of the country. Africa also offers opportunities for Dutch onions. It is the continent of the future. They are expecting the population there to reach 2,5 billion people by 2050. Onion consumption per capita there is 30/35 kg higher than in Europe. Here it is only six or seven kg per person."

Automation
Jaap is being idle in his company. Automation is an important development for onion sorters. "At the end of March/beginning of April, we are going to install a camera robot for our belt grader. This robot has cameras and a self-learning system. We can use it to save money and work more effectively. It is becoming increasingly difficult to find people to do this work."

"We do not only want to automate. We also want to become more sustainable. Our goal is to make our company climate neutral. We are doing this with, among other things, solar panels on the roof. We will install these at an additional site too. We also utilize our neighbor, Lamb-Weston Meijer’s, residual heat. This sustainable energy can also be tracked in real-time via our app,” concludes Jaap.