Potato supplies continue to be snug across North America, though how tight things are is still to be determined.

“Supplies have been tight this season from the beginning,” says Ryan Wahlen of Pleasant Valley Potato in Aberdeen, ID. “It’s a combination of factors. We had a couple of frosts last spring that set crops back. Yields were off significantly and the size profile was much smaller than normal. There was also an early frost in October that set roughly 20-25 percent of Idaho’s crop back and affected supply significantly.”

Ken Gad of South Easton, MA-based Cambridge Farms Inc. adds that there’s an uncertainty almost about potato inventories in North America currently. “I’m seeing a lot of confusion in the supply chain. The confusion is brought on by what the true remaining usable storage crop is,” says Gad. 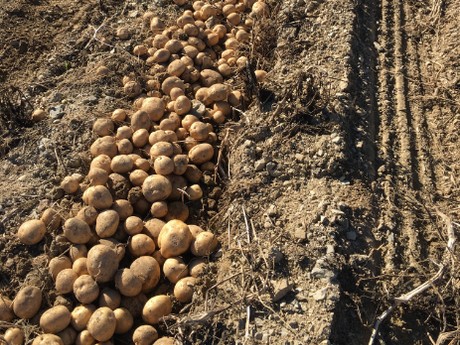 It’s not just Idaho that’s affected. “Everybody’s supplies are tight and most shippers are like us—trying to limit what they ship so that they can have something to ship through to the end of the season,” says Wahlen.

Adding to the unknown are concerns over the coronavirus. “I think it’s influencing the buyers a lot,” says Wahlen. “There are a few concerned who aren’t sure how heavy to carry an inventory of a perishable item. They’re worried about their work force being impacted. They’re worried about entertainment and travel being impacted and in turn that has an impact on foodservice.”

Gad notes something similar. “Looking at the volume of potato shipments across the past 30-90 days, I can tell you that retailers have switched and said they’re not going to put potatoes on the shelves that they can’t move at a rapid pace,” he says.

As for a variety breakdown, it goes:

REDS: “There are not a lot of reds left in storage. But they’ve lasted longer than anybody originally anticipated,” says Gad. He adds that the higher price tag on reds due to the shorter supply has kept the supply moving at a slower pace. “They slowed it up enough to make it last right through to St. Patrick’s Day in many cases. It also caused places like Idaho to have more than they thought they would have at this time of year,” says Gad.

This follows a historic summer 2019 on pricing on reds following shorter fresh crop supplies out of states such as Florida and North Carolina. “Nobody expects pricing this year to be that high again,” says Gad, adding that while it likely won’t reach those pricing levels, higher prices should be expected.

YELLOWS: “The yellow inventory, that pretty much played out like it should have. They ran through it pretty well and most people are moving on to new crop, if it’s available,” says Gad. “Yellows move very well.”

That said, similarly to red, yellows also saw high pricing last summer and in 2020, they should see some higher pricing as well as the season moves on.

WHITES: On the East Coast (Gad notes that white potatoes are largely an East Coast item), supplies in Maine lasted longer than anticipated. “But for the most part, they’ll be done by the end of this month, sometime in mid-April and that will clear the way for some new crop in North Florida when they get started,” says Gad. “The white market seeks its own level every year. But there’s room to grow on pricing on white potatoes. You can still buy some storage whites for $14 on the East Coast but those are going to run out,” he says.

RUSSETS: “Supplies of Russets have the biggest question mark,” says Gad noting that the quality of the potatoes left is unknown given the weather events that affected the growing and harvesting season. Gad notes that while quality was an issue in Russets at the start of 2020 and into February, more recently things have changed. “We’ve seen quality get really good again,” he says, noting some suppliers in Idaho for example are switching between Norkotah and Burbank potatoes to suit size profile and quality needs for the past 30-45 days. “But until we get into these later bins, we’re not sure what exactly is there,” says Gad. “I don’t see a real shortage in Russets until maybe July.

Wahlen notes that pricing is high, but how high depends on sizing. “The larger count is probably double of what it was this time last year and on the smaller count, it’s a 15-20 percent increase in price,” he says. “That pricing has been steady for awhile. The only thing that will change the pricing would be a very significant change in demand because the supply situation isn’t going to change.”