Spain: record exports of fruit and vegetables in 2019

Spain is the world's most important fresh fruit and vegetable export country. Last year, it exported a record amount of these products. This totaled 13,2 million tons valued at €13,5 billion. In terms of quantity, this is seven percent more than in 2018. Just less than 93% of Spanish fruit and vegetables are sent to European Union (EU) countries.

In the EU, Germany is, by far, Spain's most important sales market. In the past year, Germany bought fruit and vegetables from that country to the tune of 3,5 million tons. That is a six percent increase compared to 2018. That means Germany is good for a quarter of Spanish fresh produce exports.

France is at number two. Spanish fruit and vegetable exports to that country have remained fairly stable at 2,3 million tons. In third place is the United Kingdom (UK). In recent years, that country bought 1,5 million tons of fresh produce from Spain. The UK is followed by the Netherlands, which takes around one million tons a year. Italy and Poland follow.

In 2019, Spain exported 850,000 and 650,000 tons, respectively, of fruit and vegetables to these two countries. That amounts to almost 20 tons more to each country. Portugal was good for 570,000 tons last year. It is followed by Belgium, Sweden, and the Czech Republic. Fresh produce export quantities to those countries varied between 200,000 and 300,000 tons. 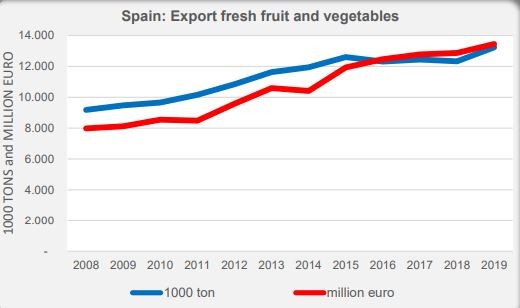 More to distant markets, but share stays low
Spanish exports to markets that are further way are growing. However, these concern reasonably limited amounts. Outside of Europe, Brazil is the most important sales market for Spanish fresh fruit and vegetables. Last year, 109,000 tons of these products were sent to that South American country. Garlic is the frontrunner when it comes to Spanish export products to Brazil. In 2019, that amounted to 22,000 tons.

Oranges, plums, and onions are other important products. There are other countries outside of Europe to which Spain sends significant quantities of fresh produce. These are Canada (90,000 tons), Saudi Arabia (65,000 tons) and the United Arab Emirates (54,000 tons) China took 44,000 tons, while the United States bought 36,000 tons. But, looking at the big picture, these are very modest amounts of Spanish fresh fruit and vegetables. 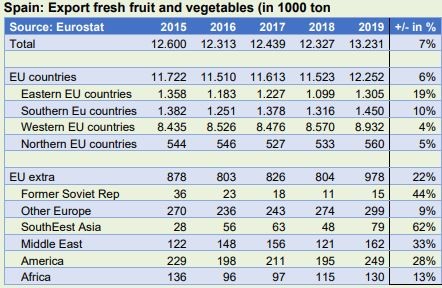 Citrus dominates, but berries are on the rise
Oranges and mandarins are, by far, the most important Spanish export products. In 2019, quantities of 1,76 million and 1,37 million tons, respectively, of these fruits were shipped out of that country. Together, these two citrus products represent 25% of the total Spanish fresh fruit and vegetable exports. In fact, 15% more oranges were exported last year than in 2018. However, in the past, this number has been even higher.

More of both of these products were exported last year than in the previous years. The top ten fresh fruit and vegetable export list is rounded off by lettuce, melons, and nectarines. Increased export figures also count for other products. These are courgette, onions, aubergines, pears, avocados, blackberries, and blueberries. Last year, Spain exported almost 70,000 tons of raspberries and 47,000 tons of blueberries. 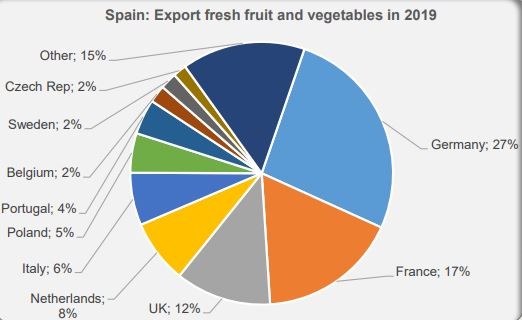 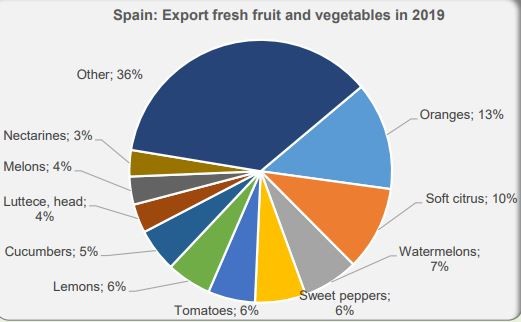