Grower held potato stocks at the end of January 2020 are estimated at 2.13Mt. This is 15% more than last season and 3% more than the 5 year average (2014-2018). This increase in grower held stocks year-on-year comes despite the end of November estimates standing at the lowest levels since 2012.

In stark contrast to the end of November, the rate of drawdown slowed considerably during December and January. By the end of January, 58% of this season’s production had left grower held stocks, which was 4 percentage points behind both last year and the five year average.

The slowing of the drawdown rate may be for several reasons. Firstly, we know that the wet weather during this season’s lifting window has presented quality issues for many. As such, much of the crop was moved early, represented in the below average end-November stocks figure.

Secondly, we know that many growers were still lifting past the end of November. Given the conditions that much of this crop would have been subjected to and lifted in, it is prudent to assume that a proportion of this would have been sold straight from the field.

Combined with a potential reluctance to sell stored material on expected market tightness and upward price movement, this has reduced drawdown of storage held material. 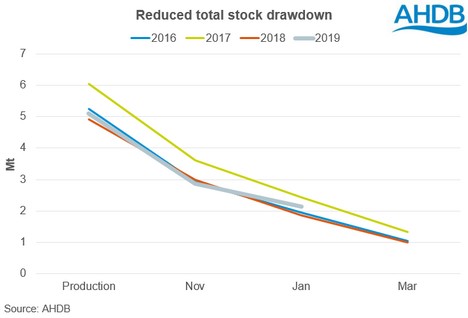 The tonnage of potatoes left in store as of January is now in line with previous years due to a reduced overall stock drawdown. There are important implications on a sector basis especially in the more free-buy focused sectors of bags and packing. 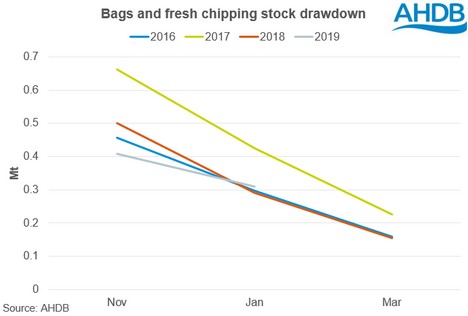 The reduced drawdown rate from November to January has led January stock levels for the bag sector to be marginally above that of the 2016 and 2018 seasons. With the volume of potatoes destined for the bag sector in January back in line with previous marketing seasons, the pressure on the bag market has now appeared to ease. 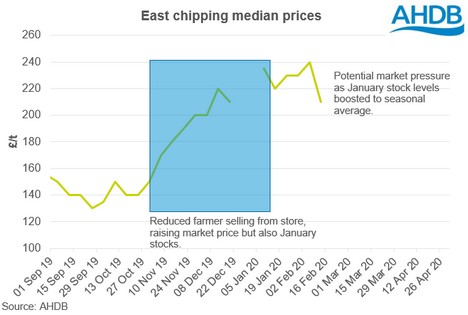 Should the drawdown rate recorded in previous years continue through to March, then chipping stock levels would be expected to be in line or above previous years.

With bag market stocks in March potentially at recent year levels, the market may be unlikely to push significantly higher and could face some downward pressure. 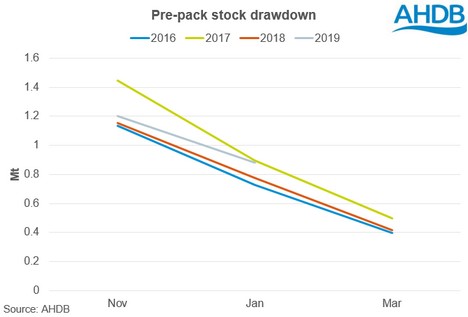 Unless drawdown rates so far in 2020 have shifted significantly from historical norms, then current stock levels are likely to have remained above average, again reducing the ability for the free-buy market to shift significantly higher. 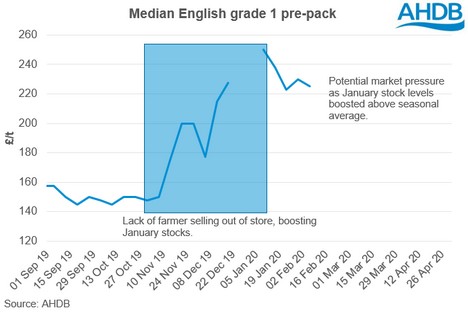