For eight years, Michigan State University and Cravo Equipment have been researching the opportunities for retractable greenhouses for the cherry industry. “We have been working on understanding the positive impact on window of supply, yield and sizing,” says Cravo’s President Richard Vollebregt. “Prior to installing a retractable roof on a cherry orchard, it is key to understand the return on investment,” he added. Eight years into the partnership, there are now installations over cherry orchards in four continents around the globe, including North America, South Africa, Europe and Oceania. Vollebregt regularly visits the different sites and talks with the growers about the benefits they are seeing from Cravo’s retractable roof system. 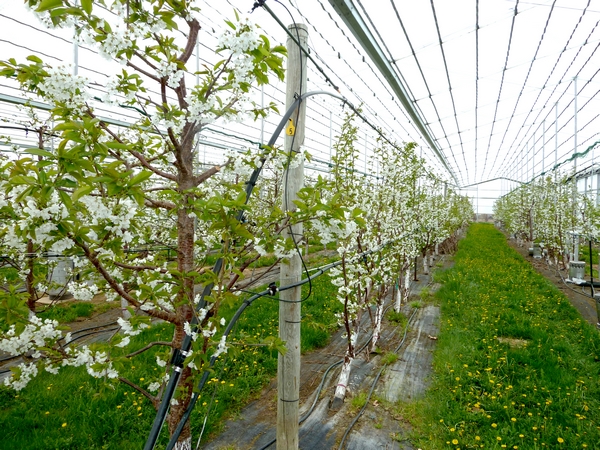 Advancing first harvest
Over at Reid Fruits in Tasmania, Australia a retractable roof was installed over a new cherry orchard late 2016. In January of 2019, Reid’s Orchard Manager Andrew Hall discussed the difference between their field-grown trees and the trees under a retractable roof. “Since we are able to control everything under the roof, we are seeing a much calmer environment,” said Hall. The trees have less exposure to wind and temperature changes and there is not much damage to the leaves. “This allows the trees to put more energy in the crop rather than trying to stand up and survive,” Hall said. A healthier tree benefits the fruit that doesn’t seem to have any wind scars, no insect damage and no rots or infections. Because of the ideal conditions, Reid Fruits started harvesting the first cherries when the trees were 2.2 years old, which is about 1 year earlier than for trees in outside conditions. “The retractable roof brought the first harvest ahead,” he said. 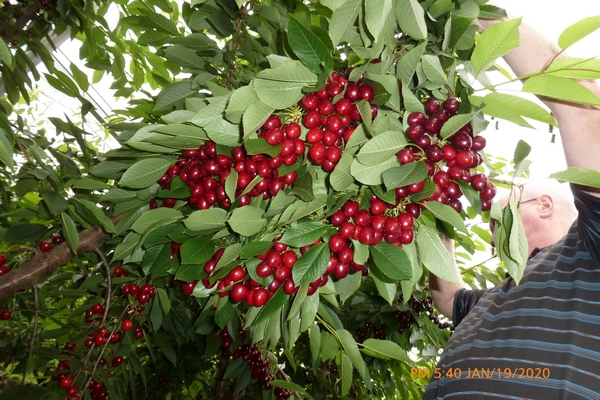 Hit market ahead of competition
Over at the Clarksville Research Station of Michigan State University, flowering starts about 14 days earlier under a retractable roof versus the field. However, the difference varies by climate. Clyde Orchards in New Zealand has been able to advance flowering and harvest by about three weeks. “The retractable roof allows us to hit the market in time for the strong lead-up to Christmas,” said Kevin Paulin with Clyde Orchards. “Most varieties are not available in stores until after Christmas and because we have supplies before our competitors, we get a premium per kilogram during the weeks leading up to Christmas.” In addition to starting earlier, the company also utilizes its packing house a few extra weeks per year and being early helps with securing staff early on and keeping them for the whole season. “Although we’ve been able to advance flowering and harvest by three weeks, we believe four weeks is ultimately possible.”

Bigger fruit and higher yields
In January of this year, Vollebregt went to Australia to visit Reid Fruits again. The company was in the middle of harvest and was able to show the difference between the fruit that grows under a retractable roof versus the fruit that is grown outside under bird nets and exposed to all weather conditions. “It’s just been over three years since the Kordia variety was planted,” said Reid’s Orchard Manager Hall. “This season, we are estimating a yield of 17 tons per hectare for the fruit under the retractable roof due to better weather circumstances especially during pollination.” This compares to a yield of just 7 tons per hectare for the fruit that is grown outside under bird nets. “The fruit grown under the retractable roof looks very uniform with large sizing between 30 and 40 mm, which is about 2 mm more compared to fruit grown outside,” he continued. In outdoor conditions, pollination used to be an issue with Kordia, but that is no longer the case.

Discussion on the exceptional yield of the Kordia variety.

The fruit that is grown outside under bird nets doesn’t look nearly the same. “We had about 4 mm of rain last week and it caused the fruit to crack. In addition, the cherries have wind scars and hail damage,” said Hall. Not only is Reid Fruits estimating the yield to be 10 tons lower per hectare, the fruit won’t come even close to a pack out rate of 95-98 percent under the retractable roof. 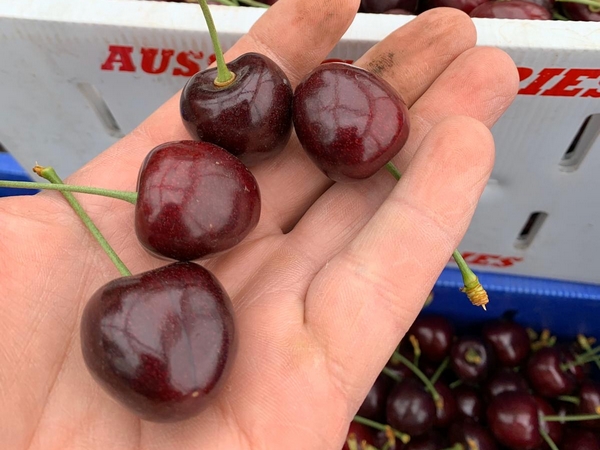 Maintaining fruit firmness
Using a retractable roof during the harvest stage helps prevent rain, hail and wind damaging the fruit. In addition, the roof plays a key role in cherries keeping their firmness. “When trees are exposed to direct sunlight during harvest, the excessive transpiration and fruit temperatures cause trees to experience water stress,” said Vollebregt. “As a result, water is being sucked out of the cherries, causing the fruit to lose some of their firmness and weight.” Closing the roof 85-90 percent will help reduce fruit temperatures and keep fruit size and firmness at optimal levels. It also allows pickers to harvest for an extensive number of hours during the day since picking no longer has to stop later in the day.