2019 was a particularly exciting year for the Dohme group: mushroom cultivation was significantly expanded at both production sites in Tietzow and Hess-Oldendorf to meet the growing demand for local mushrooms. The new packaging law also came into force, which means that half of the conventional and organic mushrooms are now to be packed in cardboard trays. Last but not least, the edible mushroom and substrate producer is now investing in new harvesting technology to counteract the noticeable lack of personnel, reports plant manager Gerard van de Wijdeven in an interview.

The demand for fresh, preferably regional mushrooms has been growing rapidly in recent years - both in the organic and conventional sector, confirms the Dutchman, who has been with the company since 2008. Brown mushrooms in particular are becoming more and more popular with consumers, as their appearance immediately associates them with a natural product. "Up until 10 years ago, the total proportion of brown mushrooms was at most 5 percent; today, about 40 percent of our mushrooms are brown heads. The sales share of organic mushrooms has increased from 8 to 18 percent within 2 years," says Van de Wijdeven. 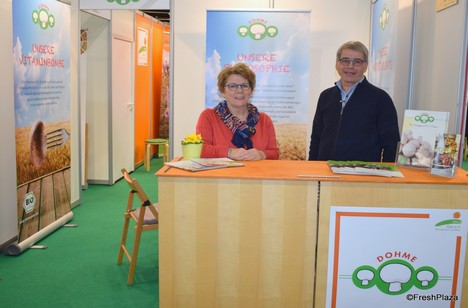 Carla and Gerard van de Wijdeven during this year's BioFach in Nuremberg. The Dutchman has already been working for the German family business for 12 years.

Capacity expansion
The expansion of capacity at both production sites of the company was therefore a logical step, it continued. "In total, our weekly production volume now exceeds 40 tons of organic and 350 tons of conventional mushrooms. In summer, especially the conventional weekly quantity could be 10 tons lower, depending on demand and weather conditions. The mushroom market is still on the rise, especially in Germany. "We are noticing that regionally cultivated mushrooms of premium quality are rapidly gaining in importance throughout the German food retail sector." 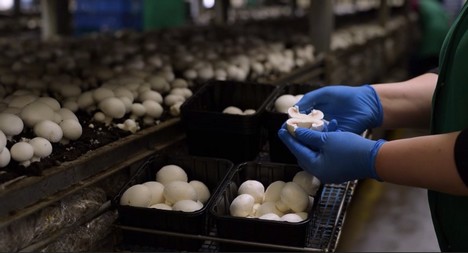 The mushrooms are still mainly picked by hand, but in the near future they will be harvested fully automatically.

Proprietary substrate production is the keyword
Today, the family business has three different divisions, namely organic mushroom cultivation, conventional cultivation, and the associated substrate production and marketing. "Our aim is to ensure a closed loop economy, especially as we have now increasingly opted for the premium segment," explains Van de Wijdeven. In contrast to the edible mushrooms, the substrates are not only sold on the domestic market, but are also exported to nearby foreign countries (including Switzerland, Scandinavia, France and Poland). 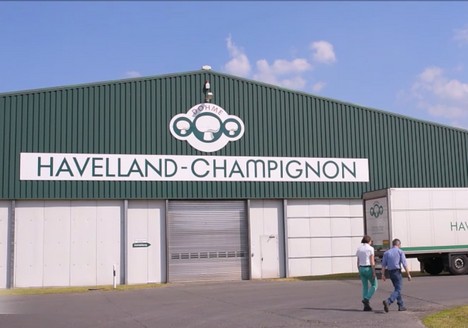 View of the premises of the company headquarters in Nauen OT Tietzow.

Carton trays and automated harvesting
Today, the group of companies supplies almost all well-known food retail chains with fresh mushrooms from its own cultivation all year round. However, Van de Wijdeven explains that this goes hand in hand with high quality criteria and other requirements, including product packaging. "As a result of the new legislation, since last year we have been supplying about half of our mushrooms in sustainable cardboard trays, the rest are packed loose in reusable crates".

In the near future, the company is striving to further optimize the production processes: This is especially necessary due to the striking lack of pickers and other employees. "We are now testing a fully automated harvesting system in one of our production cells. In this way, we hope not only to solve the growing problem of personnel shortages in the future, but also to create a considerable increase in efficiency at the production level.