Australia: Bundaberg farmers call for Paradise Dam to be fixed

Protesters in Bundaberg have ramped-up their fight for water security, demanding Paradise Dam on the Burnett River be fixed, not lowered.

A Commission of Inquiry into the construction of Paradise Dam, tasked with identifying the root cause of structural and stability issues with the dam wall, is gathering evidence at hearings this week. Among the witnesses are former engineers, designers and contractors associated with the original construction in 2006.

The dam's 300,000-megalitre water storage is being reduced to 42 per cent to allow for the spillway to be lowered for safety reasons. 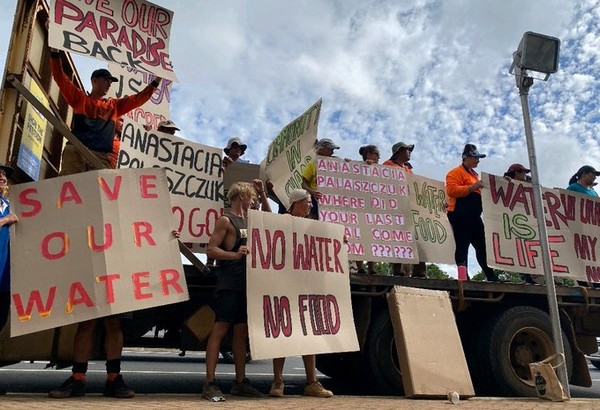 Farmer and small business owner Judy Plath said protesters want Paradise Dam repaired rather than its capacity reduced: "Not 5 metres knocked off, not 10m knocked off. We want them to fix the dam, not knock it down. We want the truth to come about the safety issues. Paradise Dam is crucial to this region. It's the little blokes who will lose out if farmers go backwards and don't have the water to look after their crops; they won't be able to employ the people they employ now."

Bundaberg Fruit and Vegetable Growers treasurer, Joe Lyons, an avocado and macadamia grower, said Sunwater and the State Government seemed adamant the wall was unsafe, but there were still questions about how they came to that conclusion.

"We don't want to put anyone's life in jeopardy but we've got to look to the future now," he told abc.net.au.  We'd just like to know what exactly is wrong with the dam wall — it survived a significant flood in 2013. We have trees that last for 40 years, we just need to sure up our water security."

Lyons said the turnout at the protest -about 80 people- showed the growing concern over the way the issue was being handled.

According to northqueenslandregister.com.au, Bundaberg Fruit and Vegetable Growers managing director, Bree Grima, lashed out at the advertisements, calling them "an insult to the people who have invested in the region based on guarantees from the state government."