"The herb market has reached its peak"

While shipments from Kenya and Israel determine the current herb market, the domestic season is already about to start. The first freshly cut herbs (salad burnet and common sorrel, for example) are already being cut, and the commercially available outdoor herbs (such as mint, oregano) will arrive on the market for the first time in about 1 to 2 weeks, according to Johannes Adams, owner of the Adams Herb Garden producer and trading company.

The specialist retailer still offers his regular wholesale and retail customers mainly Israeli fresh-cut herbs. "Demand is rather limited between January and mid-March. The wholesalers at the Düsseldorf wholesale market now import most of their goods themselves, which is why we mainly act as a supplier to the retail trade at this time of year. As soon as we are able to offer products from our own cultivation again, the regional wholesalers will also come back to me", says Mr. Adams, who decided to give up stand sales at the Düsseldorf wholesale market in 2019.

Doubling the field capacity
According to members of the fourth generation working in this specialist company, it is still the standard herbs (e.g. mint, parsley, rosemary, basil) that are most in demand. In general, however, the demand in the German trade has increased significantly. "In recent years we have been able to win over a number of large packers from the food retail trade", Adams comments. Accordingly, the cultivation capacity must also be expanded. "We now have an existing cultivation operation to lease and will relocate part of the production to the new site. In total, we will then have 20 hectares of open land: when I took over my parents' farm two years ago, it was only 10 hectares." 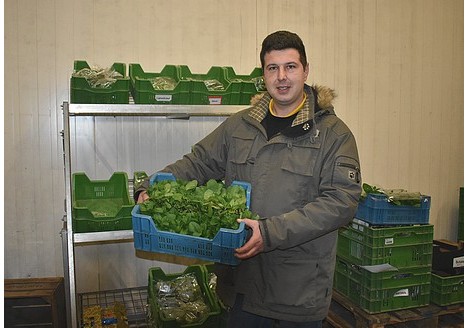 Company owner Johannes Adams (here at the wholesale market visit of FreshPlaza in winter 2017) is now heading this 4th generation family business. Last year he decided to give up selling at the company stand at the Düsseldorf wholesale market.

Herb market reaches its limits
All in all, Mr. Adams has been observing that the German market is undoubtedly on a growth course. "Many existing vegetable growers have now added herbs to their company's range. However, I do not believe that more volumes will be needed in the near future. For all intents and purposes, the market is slowly but surely reaching its peak."