In Offenbach am Main, one can find some old cellars, twelve metres deep, which were formerly used as ice cellars by the city's brewers. When the river froze over in winter, blocks of ice were cut and stored there to cool beer all year round and supply the refrigerators of private households. When these cellars were originally built -and for what purpose- is not clear. After the brewers, the vaults housed a well-known jazz club for a long time. After that, the premises stood empty for 16 years. 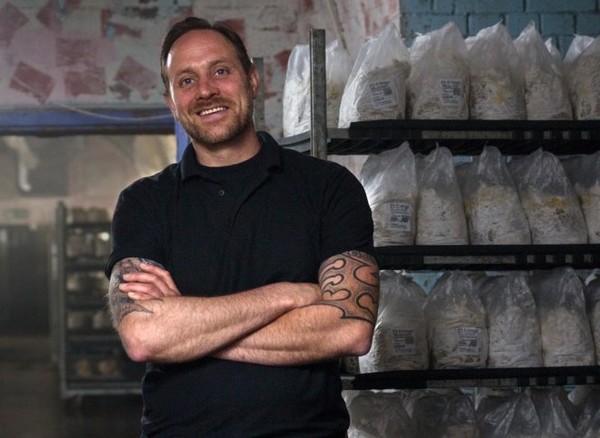 Why this story? The year-round constant temperature of 13-14°C and the naturally high humidity are ideal for growing exotic mushrooms.

Mathias Kroll, a trained nurse and hobby mushroom grower, discovered this some eight years ago and promptly turned his passion into his livelyhood. "There are only a few growers of these varieties in Germany, which means there is no training for mushroom growers, so at the beginning I was completely on my own when planning my company," Kroll recalls. "I started with exotic varieties among the exotic ones at that time but it soon became clear that consumers in Frankfurt were not yet ready for these. With the switch to shiitake and king trumpet mushrooms, I was then able to convince the consumers directly and gradually begin supplying the catering trade. There, the unknown exotics are particularly in demand." 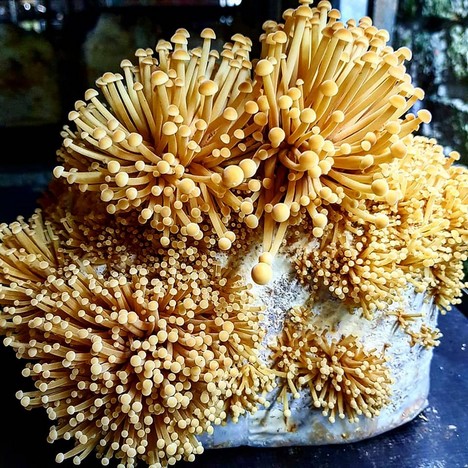 Enoki or "Golden Needle Mushroom" about 2 days before harvesting

Shiitake is still his most important variety in terms of quantity, but something more extraordinary is expected in the star gastronomy. "Of course I am not a large-scale producer but rather a manufacturer, which makes sales more difficult", Kroll knows. "The wholesale trade expects a constantly large quantity, even if a constant amount is not always required. However, overproduction and thus ultimately the waste of food is neither morally nor economically sustainable." Therefore, gastronomers and weekly markets are his main focus.

"We place a lot of emphasis on quality. I am strongly oriented towards mushroom cultivation in Japan," says Kroll. "In Japan, we can look 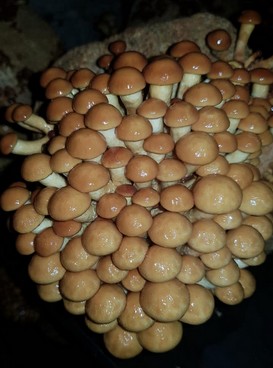 back on hundreds of years of tradition in the cultivation of exotic mushrooms, but in Germany you can't compete with that. On the other hand, there are hardly any producers of mushrooms in Japan."

Especially with regard to shiitake, the differences are clearly visible: "In the food retail trade and at the wholesale market one often sees large, open and soggy mushrooms. I harvest so early that the fruiting bodies are still closed, which makes the product firmer. This is somewhat at the cost of the yield, but it really improves the quality immensely". 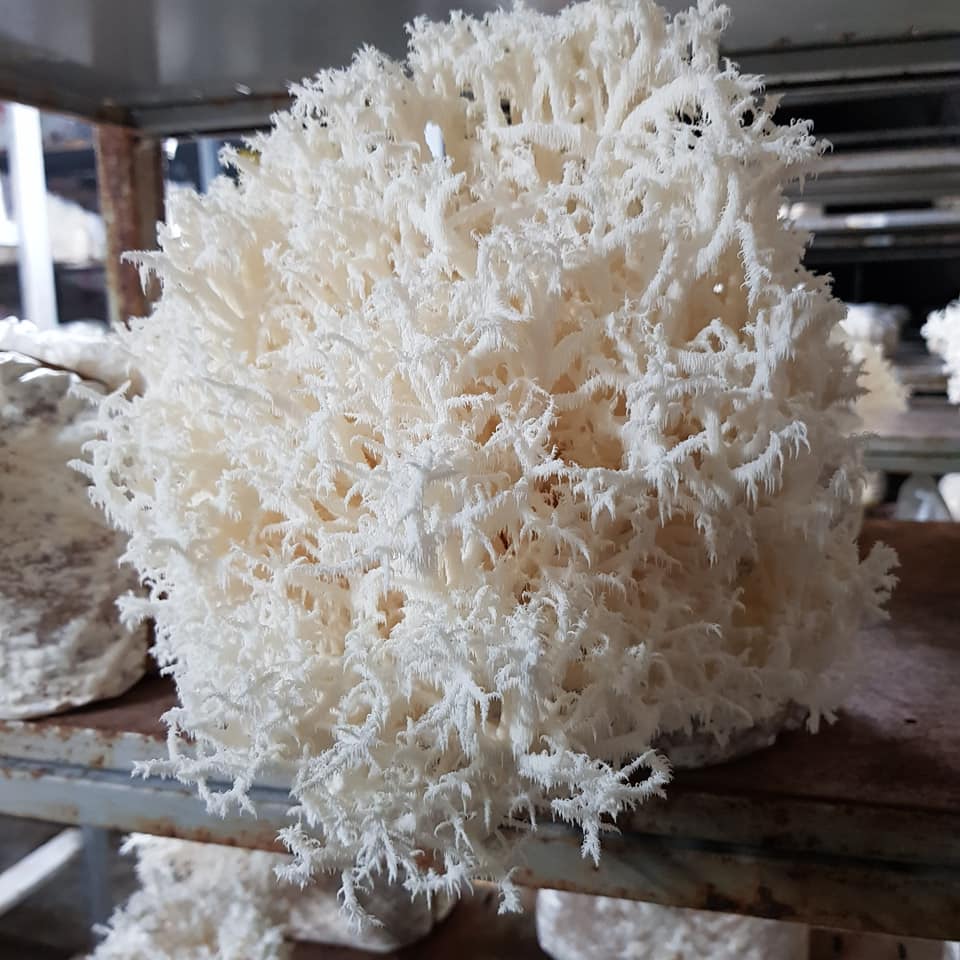 Through his company, he is doing educational work for consumers as well. "My absolute favourite mushroom is the maitake - which is very rarely found in German forests. This mushroom has an amazing aroma. In traditional Chinese medicine it is even considered a remedy. In mushroom cultivation it is very rare, but its potential is enormous. Many are sceptical at first because they don't know the mushroom, but those who have tried it once buy it again and again. In the gastronomy as well as with the consumer, this mushroom becomes more and more known and popular". 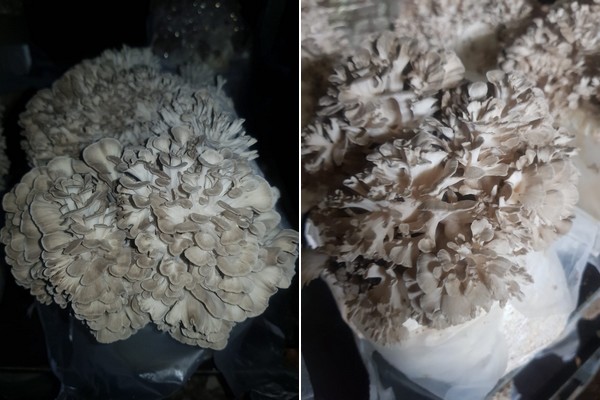 In the future, Kroll naturally hopes to further increase his sales and to make more and more exotic mushrooms tasty for his customers. He also wants to set up an online shop for his products in the long term: "Here, however, it is important to me to ship the mushrooms in a more sustainable alternative to styrofoam. So far, shipping does not make sense due to the costs for logistics, but in the future I would like to find a solution for this". 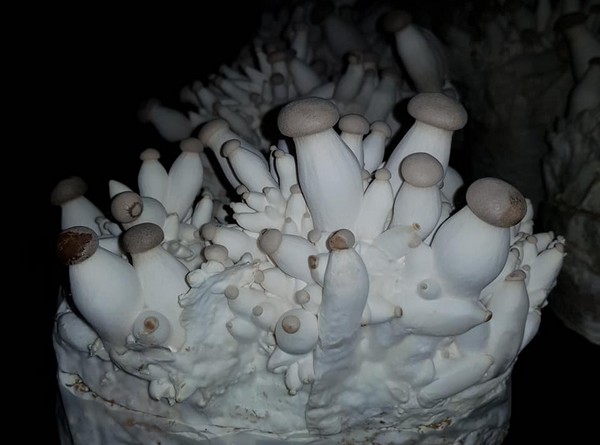 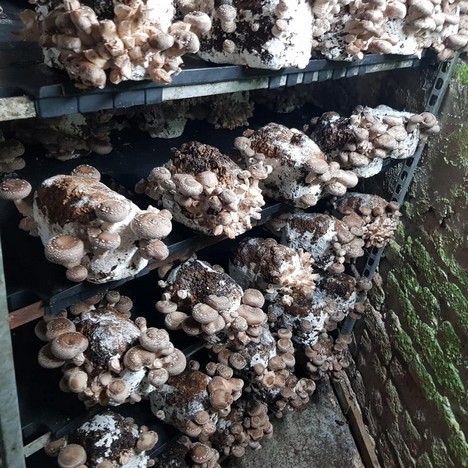 Shiitake on a substrate