“Supplies out of Skagit are dwindling rapidly. There are a couple of sheds that are done already and others are trying to hang on through St. Patrick’s Day,” says Tony Wisdom of Skagit Valley Farms and Valley Pride Sales in Burlington, Wa. “Normally there are strong shipments until April. But most sheds will be done at least a month early so supplies are limited.”

He notes that volume on yellow potatoes out of the region is much more limited than reds. “It’s possible that supplies of yellows are dwindling faster than reds and reds are dwindling rapidly. Almost everyone will be done in March, but we were very fortunate to get most of our potatoes so we have good supplies through May,” says Wisdom.

Fall 2019
This follows unusual rain activity in the region last fall. Normally in the fall, lighter rains hit the region in September while heavier ones follow in November. “And in 2019, that was flip flopped. We got about five inches of rain in September and then another three or more in November,” says Wisdom. 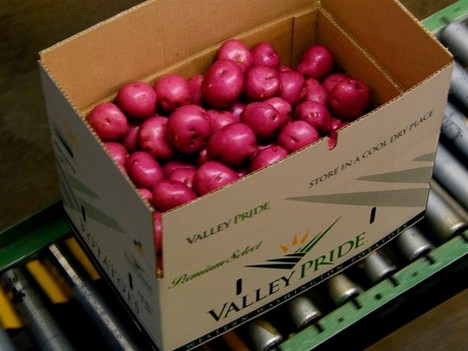 In turn, the soils became saturated and some areas were left with fields that didn’t dry out and product remained in water. “Somewhere between 12-15 percent of the overall potato crop out of Skagit was left in the ground unharvested,” says Wisdom, noting that while the region was hit hard, Skagit Valley Farm itself only lost approximately six acres of product. While field rotation helped the farm (the fields affected happened to be on well-draining soils), Wisdom notes that recently the company had invested in harvesters, trucks and storage equipment with the intention to get a lot of potatoes out in a short period of time. “And 2019 was a perfect example of that focused investment paying off for us,” says Wisdom.

Harvesting problems
While some lost product, others were delayed and for some, harvest went as late as January of 2020 for potatoes. Others didn’t find issues with product until later. “When weather like this happens, you want to get every potato you can so there’s a tendency to 'overdig',” says Wisdom. “Instead of stopping 20 feet before the wet area, you push it to 10 feet and that last 10 feet is where you have potatoes that don’t look that bad when you dig them but you put them in storage and eventually they may go bad,” he says.

All of this has led to pricing starting to head upwards recently. “We’re getting calls from people we don’t normally do business with and there’s been a lot of attention from retailers about the pricing and asking what’s happening,” says Wisdom. “Everyone’s worried about running out of potatoes in the spring and early summer. It’s a big issue.”