"We are focusing primarily on the premium potato segment"

While German volumes of stored potatoes are constantly being reduced, the first early potatoes from Egypt are appearing on the market. Although the marketing window for the imported potatoes has tended to become smaller over the years, the North African tubers have acquired a good name in the German and North-West European market due to their excellent quality, confirms Johannes Dankers. He manages the marketing office of the international Daltex group of companies, together with his father and brother. 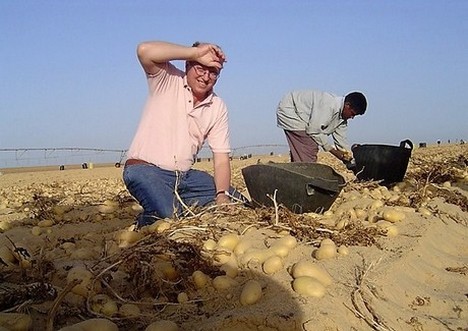 Drillinge in the premium segment are still on the market, but the first retail customers are now gradually switching to Egyptian products. "During the season Israel is of course a strong competitor in the market. In the past Israel was clearly in the lead, but now the Egyptians can convince with the beautiful skin colour of the main variety Princess as well as other German quality varieties. Furthermore, we are also seeing that some customers are deciding to additionally rely on alternative origins such as Egypt due to critically evaluated political events in the Middle East," says  Dankers.

Starting early-to-mid-May, the Italians and Spaniards will also bring their first early potatoes to the local market, Dankers says about the further course of the season. "The campaigns of the various countries of origin overlap to some extent during this phase. While May is still a month with strong sales for us, we are planning our market exit by mid-June at the latest. When the first German early potatoes have their main launch, we want to be out of the market."

Impressions from the Egyptian growing areas.

Premium quality and high willingness to invest
Our early potatoes from Egypt are becoming more and more popular with German packing companies and food retail chains, says Dankers. "Due to the good qualities we supply, we have been able to gradually increase our marketing share in this displacement market. We have clearly specialized in premium goods at a fair market price, which is why we tend to serve the more upscale segment."

The Egyptian potato industry is characterized by a great willingness to invest. For two years now, the "new" cultivation areas of Daltex in central Egypt have also been coming into profit. Dankers: "We have noticed that very fine sandy soils of this region produce an excellent appearance. A large part of the growth is intended for export. At the same time, however, domestic demand and domestic consumption are becoming increasingly important for production on the newly developed agricultural land." 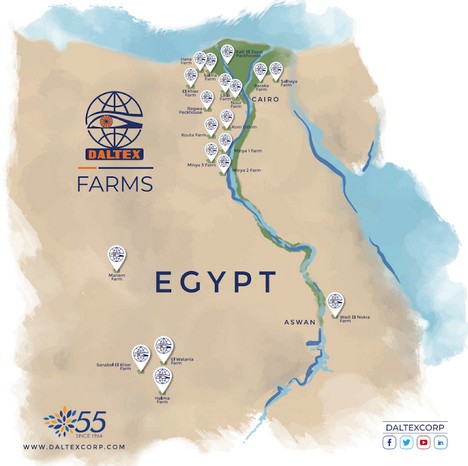 Overview of the different growing regions for Egyptian early potatoes.

Organic early potatoes; growth market of the future?
In recent years, the company has also made efforts to increase the marketing share of organic early potatoes. In this area, Dankers Daltex also serves both the firm cooking market and the triplets market. "Currently we also have organic early potatoes on offer. In general, we see of course that especially in the organic sector one pays a lot of attention to the regional origin. However, as soon as alternative volumes start declining noticeably, our fresh imported goods are a welcome addition to the consumer's range. Similarly, in the event of weather-related harvest failures in Germany, the imported goods must be used to close gaps in the range on offer."