New method for defence against noroviruses on fruit & veg

A research team led by Prof. Dr. Barbara Becker at the Technical University of East Westphalia-Lippe in Lemgo has been working on an innovative possibility: As part of a project funded by the German Federation of Industrial Research Associations (IGF), the team investigated whether and to what extent noroviruses on contaminated fruit and vegetables can be inactivated by cold-sprayed hydrogen peroxide.

Noroviruses resist many different methods of defence: They can both withstand freezing of up to -150°C and prolonged heating at 200 °C. They can also survive outside their host for more than a week. The pathogens that occur worldwide are responsible for the majority of non-bacterial gastrointestinal infections in humans. It is estimated that between 20 and 40% of all norovirus diseases are caused by contaminated food, especially unprocessed or frozen fruit and vegetables. 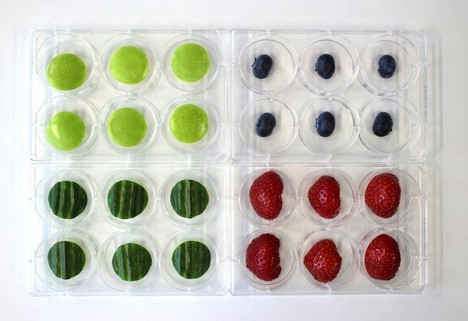 In 2018, the Robert Koch Institute (RKI) received 77,583 norovirus cases; 25 of these were fatal (only laboratory-confirmed diseases; actual case numbers are estimated to be significantly higher; source: Infectious disease epidemiological yearbook for 2018 of the RKI).

Many questions regarding the sources of contamination, detection methods and prevention measures are still open; one of the most pressing ones is: How can companies producing and processing fruit and vegetables specifically inactivate noroviruses on their products?

Cold nebulisation of hydrogen peroxide
A particular advantage of the antimicrobial agent, which is already used to sterilize surfaces, disinfect packaging and in washing baths, is that it breaks down quickly into water and oxygen. In its cold nebulization process, an H2O2 solution is converted into very fine vapours (microaerosols) at room temperature by means of pressure through special nozzles without condensation.

"In order to find out whether we were able to reliably inactivate noroviruses on fruit and vegetables with cold-nebulized hydrogen peroxide, we used two different nebulization systems in which we treated apples, blueberries, cucumbers, strawberries and raspberries, i.e. products with different surface characteristics, that had previously been contaminated with murine norovirus (MNV) as model virus," explained Prof. Barbara Becker.

"We were able to show that the cold nebulisation of hydrogen peroxide is very well suited to reliably inactivate noroviruses on fruit and vegetables with smooth surfaces," said the food microbiologist. Changes in sensory and nutrient content caused by the treatment could not be detected, and no residues of hydrogen peroxide were detected on the treated products.

The team led by Prof. Barbara Becker was able to prove the high effectiveness of H2O2 cold misting for the first time: Many fruit and vegetable producers, traders and processing companies - also in the catering trade - will thus be able to benefit from this innovative process.

Cooperation with Uni Leipzig
However, before the process can be used in a wider scale, even higher inactivation rates must be achieved even on products with rough surfaces. In a follow-up project in cooperation with the University of Leipzig, for example, it will be investigated whether noroviruses can be reliably inactivated on soft fruit by a combined application of selected chemical and physical processes.

A project for which there is a high demand: In 2017 alone, more than 151,000 tons of strawberries, raspberries and blueberries were produced and processed in Germany and 137,000 tons were imported from all over the world.